100 mn cases worldwide, as US seeks to reset its Covid fight

By By Ben Sheppard and AFP Bureaus 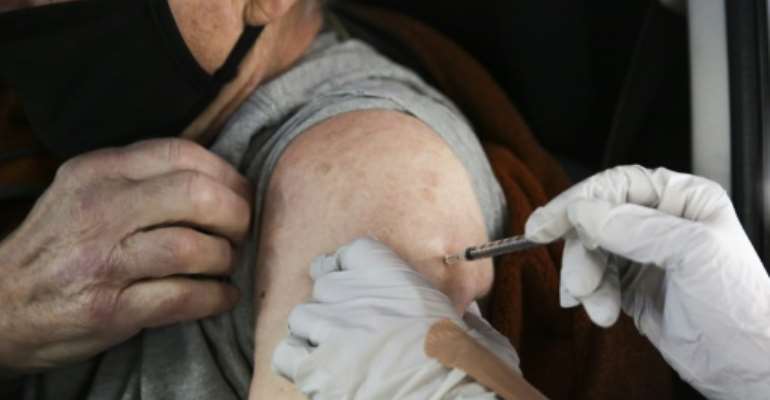 A patient receives a drive-up COVID-19 vaccination in the US state of Washington as the country tries to get on top of its massive virus outbreak. By Jason Redmond (AFP)

More than 100 million Covid-19 cases have now been recorded worldwide, according to an AFP tally on Tuesday, as newly-inaugurated President Joe Biden pledged to ramp up the United States's struggling vaccine program.

The number of cases, compiled from data provided by national health agencies, represents just a fraction of the real infections as the coronavirus has spread around the globe.

The United States, which passed 25 million confirmed cases last weekend, remains the country with the largest outbreak -- and the largest death toll of over 420,000.

Biden is seeking to turn around the fight against the virus, which took a ferocious grip on the country during Donald Trump's presidency when the risks were downplayed and officials gave mixed messages on mask-wearing and socializing.

Biden said vaccinating the entire US population was a daunting challenge, and the program inherited from the Trump administration "was in worse shape than we anticipated or expected."

"This is a war-time undertaking. It's not hyperbole," he said, announcing the US was buying an additional 200 million doses and will have enough to vaccinate 300 million Americans -- virtually the entire population -- by early fall.

In another day of grim milestones, Britain surged past 100,000 Covid-19 deaths, and other European nations looked to tighten their borders, hoping to keep out new, more transmissible virus strains. 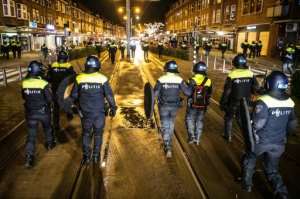 Police officers patrol the streets of Rotterdam a day after clashes with demonstrators protesting against new Covid-19 restrictions. By STR (ANP/AFP)

Prime Minister Boris Johnson said it was "hard to compute" the loss felt by British families after his country became the first European country to surpass 100,000 Covid-19 deaths.

But he said his government, which faced criticism over its initial response to the outbreak, "did everything that we could to minimize suffering and minimize loss of life."

The UK has struggled to counter a brutal third wave blamed on a new variant that emerged there before Christmas before spreading to dozens of countries around the world.

Neighboring Ireland said Tuesday it would enact mandatory travel quarantines for the first time, as well extending its third national lockdown until March 5. 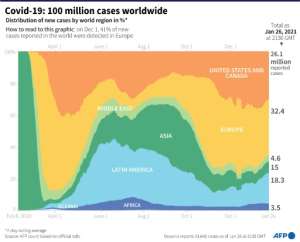 Distribution of Covid-19 cases by world region since the start of the pandemic. By Bertille LAGORCE (AFP)

Among other European nations looking to strengthen border controls was Germany, which said it is considering almost completely halting flights into the country.

Iceland meanwhile started to issue vaccination certificates to ease travel for those who have had both required doses.

The new measures came as anger rises over grinding anti-coronavirus restrictions, with the Netherlands rocked by nightly riots since it imposed a curfew on Saturday.

More than 400 people were arrested after the worst unrest to hit the country in four decades, but the Dutch government said it would not back down.

With the global death toll at 2.1 million, the world has looked to vaccines to break the gloom, but bickering over access to doses has intensified. 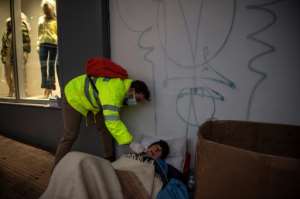 A nurse in Athens takes a swab from a homeless man for an antigenic test as Greece faces a new wave of Covid-19 infections. By ANGELOS TZORTZINIS (AFP)

Tensions have in particular mounted between the European Union and pharmaceutical firms over delays to deliveries.

Europe's vaccination campaign stumbled after British-Swedish drugs company AstraZeneca warned it would not be able to meet promised targets on EU shipments -- a week after US group Pfizer said it was also delaying delivery volumes.

AstraZeneca's CEO insisted Tuesday that the company was not selling vaccines ordered by the EU to other countries at a profit. 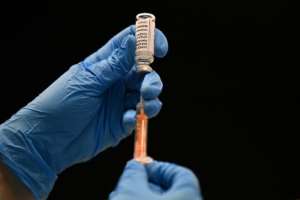 The widening gap for vaccine supplies between rich and poor countries has led to accusations of "vaccine nationalism". By Ben STANSALL (AFP)

Ramaphosa told the WEF that low- and middle-income countries were being shouldered aside by wealthier nations able to acquire "up to four times what their population needs."

The row over access to vaccines at the WEF -- normally held at the Swiss ski resort of Davos -- comes as the pandemic compounds economic inequality.

Despite Lebanon being under one of the world's strictest lockdowns, father-of-six Omar Qarhani told AFP he was still selling vegetables on the side of a road in Tripoli because he is desperate to support his family.

"I'm not scared of corona -- what scares me is being in need and poverty," he said.

Brazil banned flights from South Africa -- both countries have their own new variants -- while virus deaths in Mexico passed the 150,000 mark on Monday just a day after President Andres Manuel Lopez Obrador said he tested positive.

Nevertheless, optimism that vaccines will bring the pandemic under control and allow economic activity to resume, coupled with stimulus in major economies, boosted the IMF's growth forecast this year to 5.5 percent.