You live from football, I also live from being a man of God, why worry? Owusu Bempah blasts Asamoah Gyan 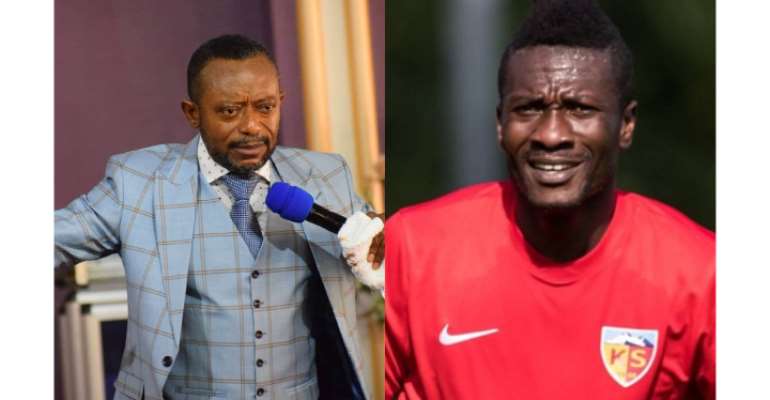 Former Ghana Black Stars captain, Asamoah Gyan aka 'Baby Jet' has admonished Ghanaians to stop giving their monies to the church and pastors in the name of giving it to God.

He said instead of wasting their monies on these so called men of God, they should rather donate it to the less privileged in society.

"Do the right thing. Give to the less privilege and do what is right and God would bless you. God would give us money. You don't have to give God money. God brought us to this world and He would give us money. He said, do good, do good and He will bless you. You're giving God money for what," the former black stars captain quizzed in a video that has gone viral on social media.

But the leader of the Glorious Word Power Ministries International, Apostle Dr Isaac Owusu Bempah has reacted by telling Asamoah Gyan that he is somebody he respects a lot "because you are an asset for the nation who has brought a lot of honour to Ghana. We respect you a lot.

"I've played football together with you guys before at ACC. Because of this, I know you and you also know me. If you're saying anything about the church and men of God, then with all humility, you have to be careful," he stated.

He adds that maybe it might sound unimportant but it is necessary for people to give offerings to Men of God. "Maybe, you don't understand what you said so, I shall be happy if you see this video you wouldn't be angry but would patiently listen so that next time, you will not make such comments again", he admonished.

Delving deeper into the matter, he said, Asamoah Gyan must know that, the job he is in, is a money making venture. "It is a gift from God and that is what you do for a living".

According to the man of God, he doesn't envy the footballer because of his expensive car or the heavenly house since he suffered to gain them.

Owusu Bempah argues that it is not only rich people who watch football but the poor also watch. "But it is this same spectators money which is used to pay you the contract you've signed. Why didn't you say that, all the monies you were given, you were going to dash all back to the poor who came to the park?" he quizzes.

He continued, "Or better still, that all those who are poor and come to watch football should go and watch for free? That is not possible, you're eating from where you work. Those who sell pepper make a living from selling pepper."

According to him, he doesn't sell anything but the work he does is to preach the word of God and based upon that, God through him brings salvation to others and win souls for Christ. "After preaching, my brother Asamoah, do you want me to come to your house for money? Or after preaching what should I eat?"

The Apostle said this in a video regarding Asamoah Gyan's comments against giving to the church and pastors.

Rev. Isaac Owusu Bempah indicated that he also has a family, children and pays schools fees plus other people he supports in school who are not his children. According to him, how was Asamoah Gyan expecting him to be able to discharge all those responsibilities?

"Is there an occasion where it is said that because you are a man of God, your children shouldn't pay fees or you go to any shop in town and you are not required to pay for any item you buy because you're a pastor?"

He noted that he even pays rent for other people to the extent that sometimes, after church, all the offerings collected can be shared among those who don't have.

"So, my brother Asamoah Gyan, should you see any pastor driving a Rolls Royce or in any other car, don't get worried about it. Because if you're driving your Rolls Royce, it doesn't worry anyone because you're only enjoying from your sweat".

According to him, when black stars are playing for mother Ghana, they [the players] take huge monies and sometimes they even threaten not to play if monies due them are not paid as required. "Asamoah Gyan, if I'm lying about this, say it".

In concluding, the leader of the Glorious Word Power Ministries asks Asamoah to retract his comments. "That is a big mistake and never repeat it again."