Election Petition: Supreme Court is not a forum for “organised, rehearsed and choreographed theatricals” — Frank Davis 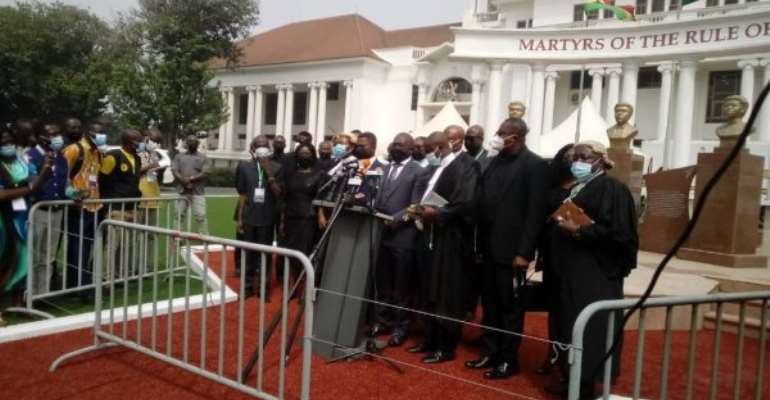 Mr Frank Davis, a Member of the legal team of President Nana Addo Dankwa Akufo-Addo in the 2020 Presidential Election Petition, says the Supreme Court is a “busy place” and not a “forum for organised, rehearsed and choreographed theatricals or a place for melo-drama.

He said the Apex Court was a “place-where serious legal businesses were held” and must be taken as such.

Mr Davis, was reacting to alleged attempts by the Petitioners to delay the proceedings on Tuesday, said the court “is not a place for flowery of literature, long prose and rather dull English devoid of any legal merit.”

The Supreme Court on Tuesday for the second time, ordered the Petitioner being former President, John Mahama to file his witness statements by close of Wednesday, January 27, 2021.

The seven-member panel said failure to file the witness statements would compel the Court to invoke sanctions of Rule 69 of CI 16, which had been amended by CI 99.

Under Rule 69, the Court has the power to dismiss the petition or impose punitive cost against the Petitioner.

Mr Davis described Mr Tony Luther, a member of the Petitioners Legal Team's comment that the application before the Court had been pre-determined, as “offensive” and “unfortunate” and said as legal practitioners who frequented the courts, “We should exercise a little restraint in the choice of our language”.

He said the Court did not take it kindly to that, but the Court had been gracious and very lenient with the Petitioner because they had been given another opportunity to rectify the wrong.

“I want to advise my colleagues on the other side that if it is not broken, do not attempt to fix it,” he said.

Mr Davis said no lawyer had absolute right to say that any application filed was within his or her remit, indicating that it was the reason why the law was there, and that “you do not come to Court with a preconceived notion of what you think you have filed.”

He said the Court at all material times was governed by rules and the Court applied the set of rules to the letter.

Mr Davies said the Counsel for the Petitioner had no right to come to Court with the “needless and unnecessary” application filed, saying, “if you disobey the orders of the Court, it comes with consequences.”

The Court has adjourned the matter to Thursday, January 28, 2021.