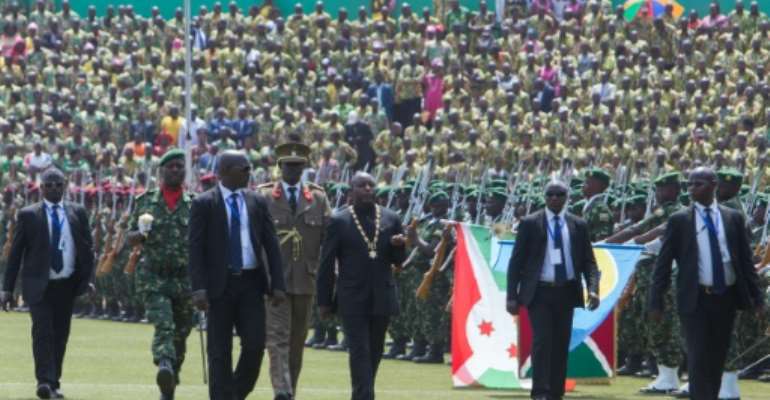 Ndikuriyo was elected secretary general of the CNDD-FDD party at an extraordinary congress in the political capital Gitega on Sunday, they said.

He hails from the hardline wing of Burundi's regime, which has been accused by rights watchdogs of brutal and long-running abuses.

Ndikuriyo, 50, is "one of the regime's hawks, a tough man who often uses controversial words," an expert told AFP on condition of anonymity.

His choice reflects "the total grip the radicals and the military have on the party and the country," the specialist added.

Ndikuriyo, a leader in the Hutu rebellion whose former generals have long exercised an iron grasp on power, was speaker of the senate from 2015 to 2020.

He succeeds as party chief General Ndayishimiye, who was elected president last May.

Posts from Ndikuriyo opponents on social media have for years accused him of calling for the deaths of opposition activists, although his supporters claim he simply has zero tolerance for unrest.

During violence following the country's contested 2015 presidential election, Ndikuriyo threatened to "annihilate" districts of the economic capital Bujumbura where people disagreed with the result.

At the time, he threatened to ask police to get to "work" -- a word freighted with memories of the 1994 genocide in neighbouring Rwanda, when Hutu militiamen were urged to do good "work" as they set off to massacre Tutsis.

Later, in 2019, he claimed at a political meeting that he had put a bounty equivalent to around $3,000 on a man's head for "interfering with security".

His ascension "is clearly a bad sign, especially regarding dialogue with the opposition and opening up politics," one foreign diplomat in Bujumbura told AFP on condition of anonymity.

But a senior party member said Ndikuriyo had already been singled out by the inner circle of generals more than a year ago, while former president Pierre Nkurunziza was still alive.

Nkurunziza, who was in power for nearly 15 years, died suddenly in June aged 55, just weeks after Ndayishimiye was elected.