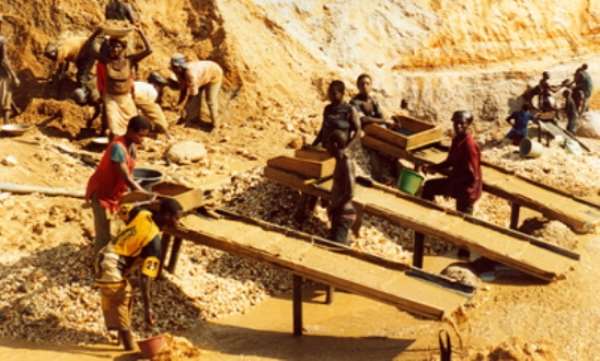 Since the late colonial era in the nineteenth century, illegal mining, loosely referred to as "Galamsey" to wit, "Gather them and sell" has become a major blot on our conscience as Ghanaians.

The persistence of "Galamsey" in the face of cautions, threats, and policies (and possibly laws) signifies the challenge with have always had as a people.

In recent Afrocentric scholarship, it is easiest to condemn Europeans for enslaving Africans. It is also too easy to blame our challenges on colonialism and Nkrumah's notion of neocolonialism.

Certainly, it is not in doubt that in a competitive world, where survival of the fittest is based on selfishness, not altruism, Africa stands to gain and/or lose based on how Africans guard their front.

It is also without any equivocation that slavery and colonialism were a drawback in Africa's quest for socio-economic development.

My only worry is that whenever we externalise the reasons for our underachievement, real as it may be, we easily absolve and recuse ourselves of any wrongdoing.

When something bad happens, the fixed-mindset persons are oft to ask, "Who did this to us?", rather than "What did we do wrong?"

Given that we have always looked elsewhere to rationalize our complicity in our troubles, we keep reinventing the challenges that entrap us in despondence.

For example, for a very long time, the debate raged over whether Africans should be given reparation or not. As would be expected, many Africans opted for reparation for slavery.

Meanwhile, we still have families in Ghana and elsewhere around the continent that are still very rich because their ancestors entangled themselves in the slave trade.

So far, Nana Konadu Agyeman-Rawlings is one of the few Asante royals who admitted in her book, "It Takes A Woman" that the Asante Kingdom was deeply involved in the slave trade.

Just as we have always turned ourselves into saints when it comes to evil, we have approached the issue of "Galamsey" as a metanarrative of foreigners invading our land.

We have always, plus or minus, accused the Chinese of either dispossessing Africans of our land or exploiting our natural resources.

In many instances, this tiring accusation, obfuscates the role Africans - "factors and collaborators" - are playing in messing the prospects of the continent.

Looking at the nature of "Galamsey" - its visibility, huge capital investment, and drudges involved in securing a parcel of land - it is difficult to assume that we are unaware of where it happens.

Also, it will be foolhardy to assume that some of our chiefs, politicians, and ordinary citizens are not involved in the "Galamsey" chain.

The parties involved in the "Galamsey" menace are aware of the harm they are causing the environment. They are also aware of how much they are ruining the chances for posterity to survive.

But, these individuals, like some of our African enslavers, are largely concerned with what they will benefit today. They are also interested in pursuing personal aggrandizement at the expense of the collective good.

The fault line in all this is that, the so-called foreigners who are destroying our ecosystem are seriously guarding their ecosystem against any imbalance.

In China, like any developed economy, any unlawful felling of trees is a crime punishable by incarceration.

In England, virtually every community has a public park, embellished with trees. And trees are protected by the state. Animals have also been royally adopted against extinction.

In our own country, we are rather sacrificing tomorrow to satisfy today's need. We are compromising on our chances of future survival. And of course, our current predicament is gapping enough.

Is it any wonder that the late Kenyan theologian, John S. Mbiti, concluded that futurism is not part of the African notion of time?

While Mbiti has rightly been critiqued, it is important to mention that the pervasiveness of "Galamsey" remains a blot on our conscience in the twenty-first-century world.

The point is that the twenty-first-century world has witnessed an unprecedented advance in technology. This is to the extent that it is possible to extract resources without unreasonably harming the environment.

But it appears that Africa remains a strange continent that is always lagging. It is a continent with multiple enigmas. It is puzzle to the world.

It is in Africa where individuals are interested in preempting the future to destroy it. It is also in Ghana where the struggle against poverty is rather impoverishing us!

In the next round of Ghanaian historians, l will not be surprised if we continue the anthem of "blame game" as we spill ink to conveniently crucify the Chinese.

In the end, even if we agree that the Chinese are dispossessing us of our land or destroying it, we must find out how they get access to the land.

The fault lines in "Galamsey need moral restitution in Ghana.