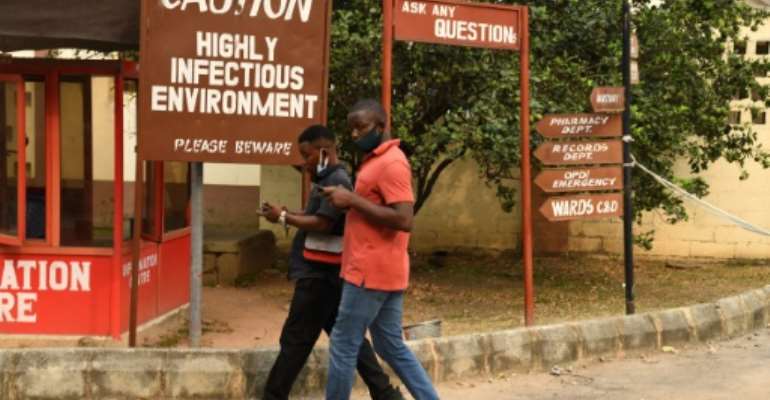 The Yaba Mainland Hospital is festooned with signs warning of the infection danger. By PIUS UTOMI EKPEI (AFP)

"Attention, isolation zone," warns a bright orange notice at the entrance to the main coronavirus treatment centre in Lagos, Africa's most populous city.

Huge black gates separate the centre at the Yaba Mainland Hospital, which takes 20 seriously ill patients every day, from the hustle and bustle of the city, Nigeria's economic capital.

The gates are not just an entrance, they symbolise the gulf between the sick and those still untouched by the second wave of this devastating pandemic.

On one side, hundreds of people crowd into the markets, many apparently oblivious to the virus' dangers, without masks and failing to observe social distancing.

Inside, the atmosphere could not be more different. Around 100 gravely ill patients struggle to breathe, bedridden and reliant on oxygen tanks.

"I would never believe that Covid-19 (could) happen to me," says Idoja Isaac, 57, a former Nigerian Navy officer who was admitted a day earlier with a fever and breathing difficulties.

When he first experienced symptoms a few days previously, Isaac thought he was suffering from another bout of malaria, never imagining that he too could be struck down by the virus that has afflicted millions worldwide.

Around half of these cases have been in Lagos, which registered the first infection in sub-Saharan Africa in March. 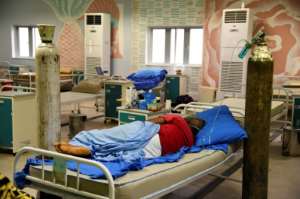 Around half the beds are empty in the Yaba hospital as infection rates have stabilised in Nigeria's second wave of coronavirus. By PIUS UTOMI EKPEI (AFP)

The figures, however, are believed to be underestimates while the number of tests carried out remains far lower than in Europe.

Despite the pandemic, many Nigerians continue to attribute Covid symptoms to malaria and therefore don't seek testing.

The potential for Covid to be missed due to it being mistaken for malaria prompted the governor of Lagos state, Babajide Sanwo-Olu, to issue a warning this week.

"In this second wave of coronavirus, any malaria symptom needs to be considered as Covid-19," he said on Tuesday.

Nigeria's second wave, which began in November, reached its peak of infections two weeks ago, and has since appeared to stabilise, according to health authorities.

In the Covid-19 centre, around half the beds are empty.

And in the small intensive care unit, two out of the five available beds are filled by intubated patients, compared with four a few weeks ago.

Likewise, the number of oxygen tanks needed to treat patients has gone from 70 a day a few weeks ago to 500 a day at the peak before coming back down to 350 a day today, said Lagos Health Commissioner Akin Abayomi. 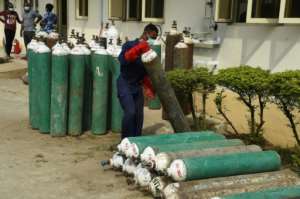 Hundreds of oxygen tanks are needed each day to treat patients. By PIUS UTOMI EKPEI (AFP)

"We have never not had enough oxygen. We've been close to not having enough and we've been stretched, but we've never been in a situation when we had patients who needed oxygen, and there's no oxygen," he said.

The centre has just inaugurated its own small oxygen plant which produces 60 cylinders per day, the rest being supplied by the private sector.

But oxygen could run out if infections start to rise again, a possibility the authorities cannot rule out -- especially with a new variant of the virus recently discovered in the country.

At the same time there is concern about the ability of exhausted medical staff to cope with future demands on them.

"Some of us here, we don't even sleep at night, because we have calls, we have to go and attend to patients," said doctor Adejumo Olusola.

"Some of us don't leave, we stay in the hospital, two, three days, some five days,"

Like many Nigerians, medical staff are praying that there is no new peak before the end of February when the country is expected to receive its first doses of the vaccine.