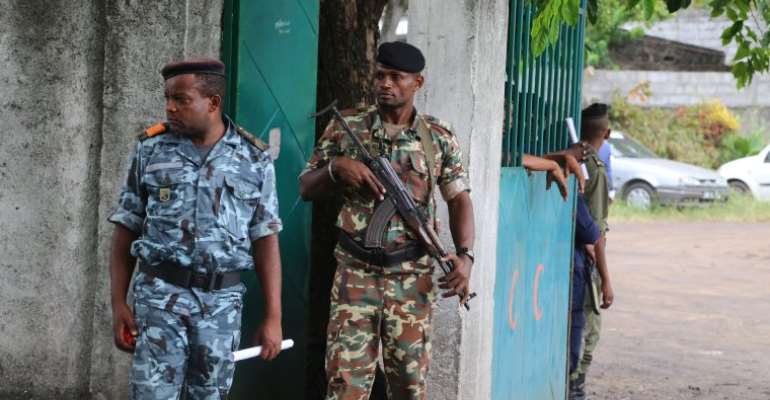 Soldiers are seen in Moroni, Comoros, on April 2, 2019. Authorities recently detained two journalists over their coverage of protests in the city. (AFP/Youssouf Ibrahim)

Comorian authorities should immediately cease their legal harassment of journalists Oubeidillah Mchangama and Ali Abdou Mkouboi, and permit them and FBCK FM to report freely, the Committee to Protect Journalists said today.

On January 7, members of the Comorian gendarmerie arrested Mchangama, a reporter with the Facebook-based news outlet FCBK FM, as he reported on a protest in Moroni, the capital, according to statements posted by the National Union of Journalists in the Comoros (SNJC), a local trade organization, a report by FBCK FM, and Mchangama, who spoke to CPJ via messaging app.

Just after midnight on January 9, gendarmerie officers arrested Mkouboi, a reporter and camera operator at FBCK FM, at his home in the capital, according to those sources and Mkouboi, who spoke to CPJ in a phone interview.

Mchangama was released on the night of January 9 and Mkouboi on January 11 pending further hearings, according to the journalists and posts by FCBK FM .

Both journalists said they appeared separately before a judge on January 11. During their detentions, authorities accused them both of participating in recent protests against the ruling government, they said.

Mchangama is due in court tomorrow, and Mkouboi on January 23, according to Mkouboi, a copy of Mchangama’s court summons, which CPJ reviewed, and Said Mhadji Chamsoudine, secretary general and interim president of the journalists’ union, who spoke to CPJ via messaging app.

“Comorian authorities should refrain from prosecuting journalists Oubeidillah Mchangama and Ali Abdou Mkouboi, and permit them to work free of intimidation,” said Muthoki Mumo, CPJ’s sub-Saharan Africa representative, from Nairobi. “The repeated arrests and attempts to stop FBCK FM journalists from reporting on protests or other issues of public interest indicate that press freedom is under attack in Comoros.”

Both journalists told CPJ that they were first questioned at the gendarmerie office in Moroni, and then transferred to and held in the city’s Research Brigade facility.

Mchangama told CPJ officers questioned him about taking part in the demonstration he was covering and accused him of “having touched a banner or a flag.” Mchangama denied touching any such banner or participating in the protest. Mkouboi told CPJ that officers accused him of being an activist and organizing a protest, which he denied.

Mchangama told CPJ he did not know if his and Mkouboi’s cases were linked, but that this case was separate from his detention in December 2020, which CPJ documented at the time. Mchangama was also arrested in February and November 2019 in connection with his reporting.

When CPJ called Comorian Public Prosecutor Mohamad Abdou, he requested that questions be sent via messaging app; CPJ sent questions but did not receive any response.