Nana Akufo-Addo Must Be Studied In Our Schools 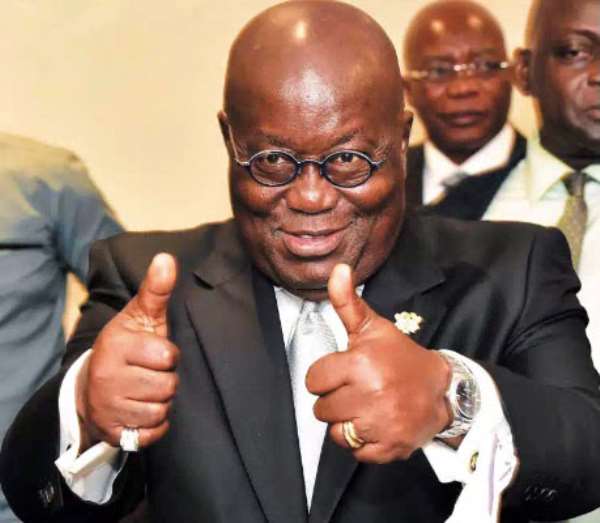 Prior to his ascension to the throne of President, all manner of inhumane things were said about the person of Nana Addo Dankwa Akufo-Addo. The rank and file of the NDC made it a deliberate and a conscious effort to malign this nobleman to destabilise his presidential ambition. Neither would they see eye-to-eye with him nor hear his voice.

They called him “midget, murderer, wee-smoker, womanizer, misfit, cancer patient” among others. They used several media outlets (local and international) to embarrass the innocent man for no reason. Not a day went by without a caricature of him on the front pages of pro-NDC newspapers. As if that was not enough, some were bold enough to say that he wasn’t destined to become President of Ghana; they spoke as though they were the intermediaries between God and Ghanaians.

With all these staggering proportion of character assassination, Nana Akufo-Addo on no occasion sued any of his detractors or pro-NDC newspapers in court for defamation. Rather, he allowed nature to take its course. An NDC communicator who in the run up to the 2012 election accused Nana Akufo-Addo of disrespecting Muslims by alleging that he had urinated very close to a Mosque up north, died of urinary tract infection later.

Again, Peter Otukunor, now Deputy General Secretary of NDC, the man whose sense of fashion is deep seated in Korle Lagoon such that he wears caftan on camboo, accused then-candidate Akufo-Addo of having murdered his late wife. You know what happened? Otukunor’s wife died mysteriously and that incident “humbled” the then loudmouth communicator.

Like Jamaican reggae icon, Robert Nesta Marley said in one of his songs, “who Jah bless, no man curse”. Nana Akufo-Addo is blessed beyond human comprehension. He doesn’t allow bad mouthing by his detractors to distract him. He has demonstrated enough resoluteness and perseverance in his legal profession and political career.

He is a goal-getter. He sets his eyes on the ball and not until he scores the goal, he never gives up. He’s been through the trenches; traveled across the length and breadth of Ghana, canvassing for votes. Sometimes, he was beaten by the rain, stung by bees but he wouldn’t give up. That’s the character I am talking about.

Having become the first General Secretary for the People’s Movement For Freedom and Justice (PMFJ), a group which fought the Kutu Acheampong dictatorship regime in the ’70s through to the Rawlings’s era, he became the first National Organiser of NPP in ’92 and first contested the NPP flagbearership in 1998 against J. A. Kufuor. Losing to Kufuor at Sunyani, Nana Akufo-Addo didn’t give up. Instead, he gave his all and campaigned vigorously with Kufuor throughout the then 200 constituencies of the country. Nana Akufo-Addo was even more visible than then-campaign manager, Alhaji Inusah, who crossed carpet to the NDC at the eleventh hour.

Due to his hard work and rich credentials as a lawyer (he’s been cited in the GLR many times), he became the first Attorney-General and Minister for Justice under Kufuor and later, Minister for Foreign Affairs until he resigned to contest the 2007 presidential primaries of the NPP. He distinguished himself to perfection in these two portfolios. He was the only man who never used government cars or bungalow. He used his personal properties to serve Ghana.

After that unprecedented 17-man contest at Legon, Nana Akufo-Addo became the party’s presidential candidate in the 2008 election. Due to voter apathy among NPP grassroots, he lost narrowly (40,000 vote difference) to the late Prof. John Atta Mills after three (3) rounds of voting–(main election, runoff and Tain Constituency).

Nana Akufo-Addo wouldn’t give up his political ambition, he re-contested the party’s presidential primaries and became its candidate in 2012 election, but lost to John Mahama in an irregularities-riddled election. As a peaceful and democratic man, he chose the path of the rule of law and headed for the Supreme Court. What happened there is history. His concession speech after that eight-month marathon Supreme Court judgment won him admiration from both the local and international stage.

The overwhelming Ghanaian majority having seen his good intention for Ghana rewarded him with 53% of the valid votes cast as against his main contender and then-incumbent President, John Mahama’s 44.4% in the 2016 election. Nana Akufo-Addo has reaffirmed the saying that, “a bend in the road is not the end of the road.”

Coming into office in 2017, the Akufo-Addo-led government in its first term introduced and implemented life-touching policies like Free SHS, 1D 1F, NABCO, 1Village 1Dam, Restoration of Teachers and Nurses Trainee Allowances, 1-District, 1-Warehouse etc according to its manifesto promise – these were promises the NDC called audacious and ridiculed.

Undoubtedly, this remarkable achievement is what won him a second term in the December 7, 2020 election. The man Nana Akufo-Addo is indeed a unique character who must be studied in schools. His ability to ignore ugly noises and keep focus is worth emulating. I’m hoping that with all the challenges that he’s gone through and surmounted in the past, he will appoint people who share his vision. His second term government must be devoid of self-seeking appointees. He must appoint people who have the requisite qualification, technical knowhow and heart to work hard to meet the expectation of himself and footsoldiers in order to make the 2024 election an easy task for the NPP.

I rest my case.
Assalamualaikum.
By Sir Obama Pokuase