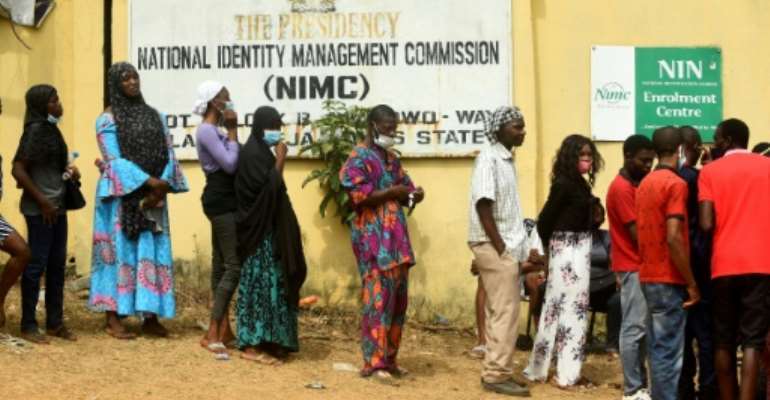 Nigerians queue to obtain the precious National Identity Number -- without it, their mobile phone may be cut off. By PIUS UTOMI EKPEI (AFP)

"If I don't have my phone, I don't make money," said Raphael Ajih, resting on a rusty metal chair, his hands clenched on his lap.

The government of Africa's most populous country has ordered telecom operators to block the SIM cards of anyone who fails to register for a National Identity Number (NIN) by February 9.

Across the country, many like Ajih are trying to comply with the directive, only to be frustrated by days-long waits to do the paperwork, often in large crowds despite the Covid pandemic.

The idea behind the NIN is to create a single ID database for Nigeria's 200 million people, replacing the hotchpotch of documents, from drivers licences to voter cards, that citizens use to identify themselves.

A unique number for each person, which in turn will unlock their national ID card, will help to smooth out problems in policy-making and budget planning, the government says. 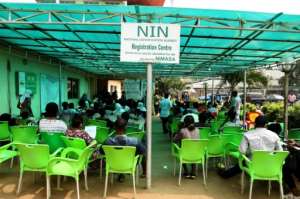 Applicants say they sometimes have to wait days to get their NIN. By PIUS UTOMI EKPEI (AFP)

The change will also fight Nigeria's rampant crime, goes its argument. By linking the ID number to a SIM, this will weed out unregistered cards used by crooks and jihadists.

Ajih, 38, sells goods via WhatsApp and Amazon and works as an Uber driver in the capital Abuja -- jobs that enable him to financially support his two younger brothers and sister as well as extended family members.

He sends money to relatives by mobile transfer, something he may no longer be able to do if he fails to get a NIN and submits the number to his mobile operator.

He has already tried twice to enrol but was taken aback by the throngs of people, many not wearing facemasks and not social distancing.

"Covid is real, and yet they are telling people to do this, and there's no control," said Ajih, who decided not to join the crowds.

Nigeria's health ministry did not respond to AFP's questions about the gridlock reported at enrolment centres. The spokesman of the National Identity Management Commission (NIMC) which runs the process declined to comment.

In addition to the crowds, many people have complained that the process to register is too slow and too complicated.

On a recent Monday morning outside the Grand Ibro Hotel, which rented out space for the enrolment, men and women of all ages were sitting on the pavement, waiting.

As a man hesitantly walked out the main entrance to call out a name handwritten on a scruffy piece of paper, a man in the crowd started shouting.

"They say they can only do 50 people a day while we have thousands standing here! It's unfair!" said Ugochukwu Ofor.

"We are finding it difficult, very very very difficult. This is the 7th time that I come for this."

"This is very frustrating. I left my kids at home, I couldn't take them to school today," said Otitoju Funmi.

In a statement, the Nigerian Communications Commission, the independent regulatory authority for the country's telecoms said "linking NIN to SIM(s) is for the common good of all Nigerians" and will have "far reaching benefits."

At one registration centre that AFP was able to visit, in Karu, about 50 people were waiting outside in the heat, uncertain they would make it inside that day.

The decrepit room where the enrolment took place was about 12 square metres (130 square feet). Inside, only two employees were taking people's details, typing away on two old computers as a noisy fan whirled above their head.

In Nigeria, personal data and biometric information is collected separately by a dozen federal agencies as well as state agencies.

The government has been trying to centralise all that information for over 10 years, with the NIN. 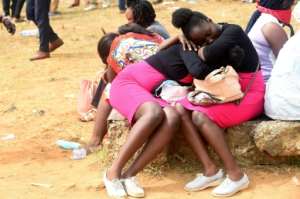 Applicants sleep as they wait to obtain national identity numbers in the Lagos state capital of Ikeja. By PIUS UTOMI EKPEI (AFP)

By linking the process to people's mobile phones and fixing a deadline, it found a way to encourage registration.

"I believe that the deadline is to make people take the process seriously," said Ike Nnamani, president of the Association of Telecommunications Companies of Nigeria, a non-profit organisation that represents telecom operators.

But it is a mammoth task.

The number of active phone subscriptions in Nigeria is 208 million.

Due to the difficulties encountered at enrolment centres, about two weeks ahead of the February 9 deadline, between 16.8 million and 64.6 million were yet to be linked with a NIN, according to data released by the NCC.

Nnamani insists that the suspension of lines is the "very last resort".

Ajih will try to register again, he says, but whatever happens, chooses not to be defeated.

"If push comes to shove and I don't get my NIN, I'll survive."

He has no other choice.