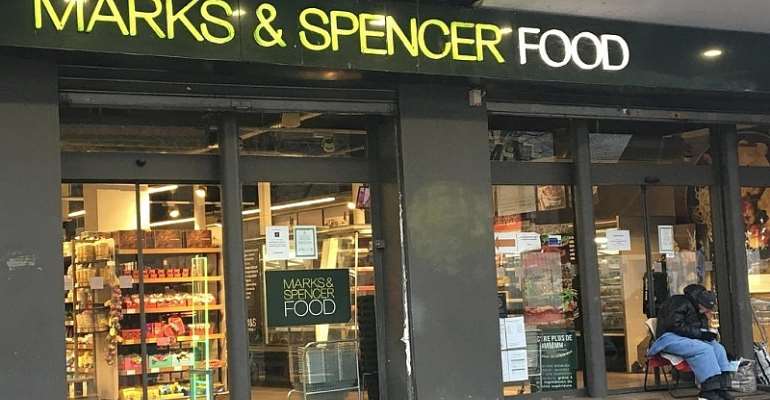 More than three weeks after the UK left the European Union, Marks and Spencer food stores in Paris are still short of fresh food. This shouldn't matter in view of France's rich food culture, but for some British expats it's a very “Proustian” reminder of severed links.

Saturday at the M&S food store in Paris's Montparnasse station, a few passengers are shuffling around the aisles in search of a quick sandwich or ready-made meal before travelling back to destinations in the west of France.

But many cupboards, or in this case, refrigerators, are bare.

There are no sandwiches, salads, fresh veg and fruit, fish, cream, meat or yoghurt and very few of the British retailer's famed ready-made meals.

Julia, a teacher living in Tours, clutches a box of six Bramley Apple Pies, and stares in disbelief at an empty meat fridge.

“I came to buy mini pork pies,” she says despondently. “I always stop and buy some on my way back to Tours, along with salads and Wensleydale cheese.”

Today is not a good day: no pork pies, no salads, no favourite cheese.

As she heads off to pick up some salt and vinegar crisps, some people stop to read the signs plastered in both French and English on each of the empty fridges.

The new rules on trade between Europe and the UK since Brexit have affected animal products in particular. Meat, fish, dairy, eggs and so on now need a veterinary certificate to make sure they conform to EU regulations. It's taking a long time to sort out.

So we must be patient, and it's only food isn't it? Half the world lives on less than 10 dollars a day, they're not fretting about a dearth in curry pots. And we're in a Covid pandemic. Get a grip!

As my mother back in England pointed out the other day: “Why do you need M&S when you have all that French food?”

I also believed I was “over” M&S. When the retailer shut its last clothes store on the Champs-Elysees in 2017 and I had to source socks, 40D black tights and lingerie elsewhere, it seemed like a good time to cut strings with their food too.

While mini pork pies had never been my péché mignon, I had others: clotted cream, shortbread and 3-year old Cornish Cruncher cheddar cheese.

So I convinced myself Beaufort cheese was a good substitute for mature cheddar, that crème fraîche was healthier than double cream, coffee more Parisien than breakfast tea.

But standing in front of those empty shelves was a very physical reminder that Brexit is done.

And the difficulties in returning to the UK for the moment have increased the need for comfort food. Brexit is recent, but streaky bacon, mini pork pies and clotted cream have already become our madeleines de Proust.

“When I couldn't go back to the UK at Christmas I came to M&S to stock up on Christmas Pudding, mince pies, all the trimmings,” Julia told me. “I realised just how dependent I am on this shop.”

A taste of your roots

“When I'm nearby an M&S I can't resist getting a taste of my roots,” says Ros a French-British foodie who has lived in France for more than 30 years.

For her, that would be Scottish fried haddock for fish and chips, Cumberland sausages, and some Indian dishes.

“It's not that I can't get alternatives here in France, but every country has its cuisine and a French morteau sausage just isn't the same as a Cumberland.”

'Didn't think it would be this bad'

“We live round the corner and come here most weeks for spicy foreign dishes like biryani and onion bhaji,” say Mathieu and Gauthier. “French supermarkets don't really do them, or not as well.”

Their favourite Asian section is close to empty. "We'd heard about Brexit shortages but didn't think it would be this bad," Mathieu sighs. "If it continues, there's no point coming.”

They leave with an “Indian starter selection” and top off with double chip cookies and crumpets from the still well-furnished sweet and biscuit section.

A puzzled customer asks the M&S cashier at Montparnasse when bacon and sausages will be back on the shelves.

“I don't know, ask the English,” she replies deadpan.

M&S declined an interview but sent us a statement: “We have prepared for changes associated with Britain leaving the EU in order to minimise disruption for customers. As we are transitioning to the new processes, it is taking a little longer for some of our products to reach stores, but we are working with our partners, suppliers and relevant Government agencies and local authorities to quickly improve this.”

She has a point. Company chairman Archie Norman warned of the risks of shortages as early as August 2018.

“If our lorries are sitting in a lorry park near Dover for half a day, that would be the demise of the great M&S sandwich in Paris,” he told Financial Times.

It could be the demise of much more.
The M&S food store in Paris's Gare de l'Est is "closed until further notice".

“If the food shortages continue,” said Montparnasse's moribund cashier, “We could end up closing too.”

That would be a big blow for jobs and for tastes of home, without having to actually live there.