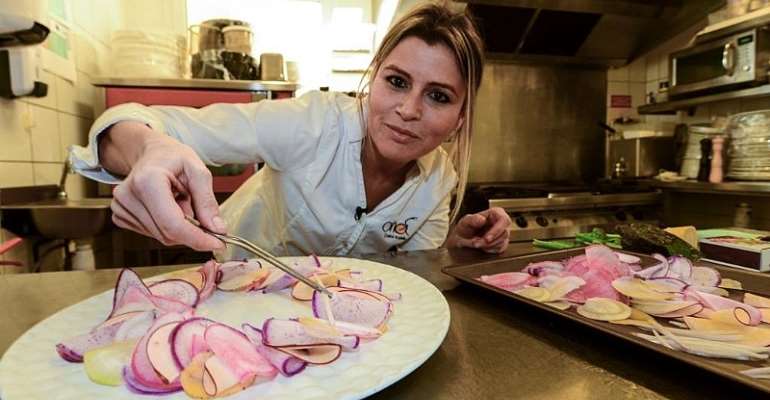 The restaurant ONA in the south-west of France has become the first all-vegan eatery to be awarded a Michelin star. Chef and owner Claire Vallée was also awarded a green star for ethical practices in creating her "high energy" cuisine.

"This is very emotional for me, my team, my suppliers, my family and my friends," Vallée tells RFI. "The little 'ants' who helped us with the work, the crowdfunders... It's a great human adventure."

ONA, which stands for "Origine Non Animale" (animal-free origin), is the first vegan restaurant to win a Michelin star.

Vallée also won a green star, which Michelin introduced only last year to reward establishments with a strong record for ethical practices.

The 41-year-old runs her vegan restaurant in the city of Arès, near Bordeaux, which she launched in 2016 thanks to crowdfunding and a loan from a green bank.

The usual French banks were very sceptical when she came to them looking to get started. "The outlook for veganism and plant-based food is too uncertain," she was told at the time.

From archaeology to vegan cuisine

After studying archaeology, Vallée went to Switzerland to work as a waitress and then trained as a pastry cook. She quickly became a chef and then left for Thailand for a year to discover Thai and vegan food.

"I discovered a cuisine which really focused on plants, roots and spices," she says. "It's in their basic food. I liked it very much. It was a bit of a revelation regarding the animal cause, the ecological impact and the health side which is essential in this type of food." Vegan cuisine, is it good or not? You have to come through the door and have a little walk around the house and taste what we do.

Vallée offers seven dishes on her gourmet menu and can serve up to 30 sets before she renews it – during "normal" times without Covid-19 disruptions, of course.

Her recommendation for this winter: "A roasted cauliflower cake with spices and fresh turmeric, accompanied by a seaweed tartar with lemon caviar and roasted sesame and a crunchy buckwheat tuile." Bon appétit.

The menu changes with the season. Vallée works with various local and organic suppliers in the Arcachon Bay.

"It's a cuisine of creation and passion, and commitment to products that are packed with flavour and come from small local producers.

"We all work hand in hand, we are very close to each other. We communicate as soon as there is something new with vegetables. We also plant special herbs for the restaurant."

Only five percent of her clients are vegan; the rest are people "who like gourmet food".

"My cuisine is colourful, full of life and high energy! I also think that's why we're here today."