'Excessive' detentions on trial in Morocco 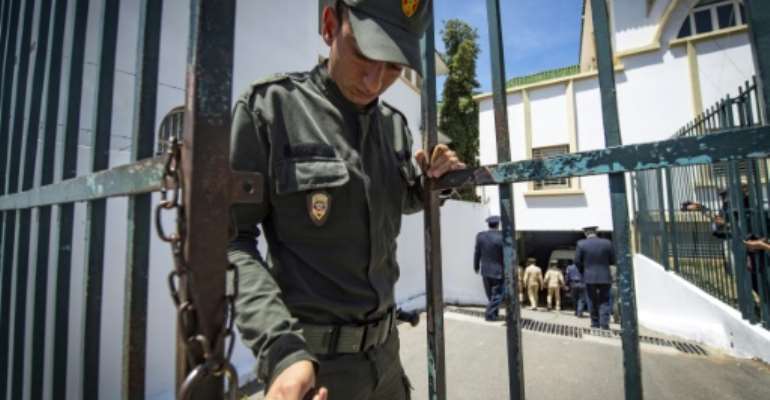 A member of Morocco's security forces locks the entrance to a court in Sale near the capital Rabat in this file picture taken on May 16, 2019. By FADEL SENNA (AFP/File)

Morocco's detention of thousands of suspects awaiting judicial proceedings has sparked a heated debate in the North African country, with even prison authorities criticising its "excessive" use.

Rights groups have warned of the use of preventative detention against political opponents.

As many as 39 percent of detainees in Morocco's jails at the end of 2019 -- over 33,000 people -- were awaiting trials or verdicts, according to an annual report by the chief prosecutor.

The report urged courts to rein in their use of the measure, saying it should only be applied in "exceptional" cases.

It also called on lawmakers to provide "alternatives" to pre-trial detention by finally pushing through a reformed penal code, under discussion since 2016.

The prison service in July also criticised "excessive" incarceration of suspects awaiting trial, calling it an "exception that has almost become a rule" and saying it was contributing to overcrowding in the country's jails.

But a coalition of 20 of the country's main rights groups said recently the policy was being "applied without balance, wisdom or foresight".

In a statement, they called for an end to detentions before investigations and trials.

They urged authorities to release "all victims" of the policy, highlighting the cases of journalists Omar Radi and Souleimane Raissouni, as well as Maati Monjib, a historian and rights activist.

Their lawyer Mohamed Messaoudi told AFP that "nothing justifies keeping them in preventative detention".

"They weren't caught committing any crime, and they pose no threat" to society, he said.

Their treatment "confirms their statements that they have been detained for their opinions."

Radi, 34, has been in prison for six months over allegations of rape and spying.

The rape investigation was completed in November, while the espionage probe, which authorities launched after Amnesty International published a report claiming Radi's phone had been tapped, is ongoing.

Monjib, 60, was arrested in a Rabat restaurant as part of a long-running money-laundering investigation on December 29.

He says none of the accusations against him are new. But despite the investigation being opened as long ago as 2015, he has yet to appear before a judge.

Raissouni is chief editor of Arabic-language newspaper Akhbar Al Yaoum and a longtime critic of the country's ruling elite.

He has been detained for eight months over alleged sexual harassment.

According to Messaoudi, who is also defending Raissouni, the investigation has been completed -- but no trial date has been set.

The Moroccan authorities say the judiciary is independent and strictly follows the rules.

NDC urges supporters to remain calm ahead of election petiti...
4 minutes ago