105 persons arrested in Tema for not wearing face mask 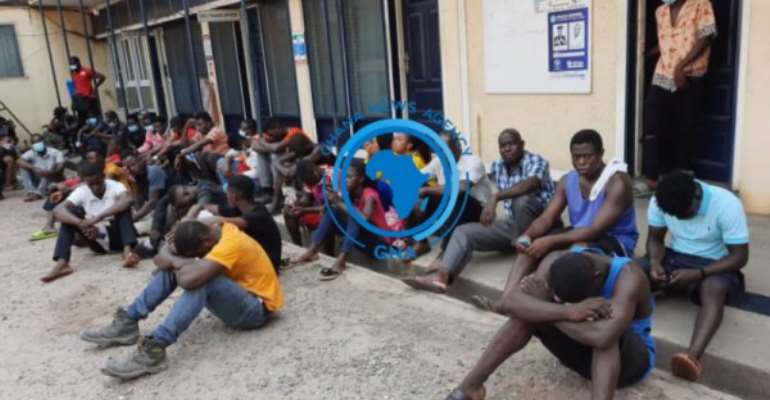 Some 105 persons have been arrested by the Tema Regional Police Command for not wearing face mask in public space.

The four-hour operation in Tema Community One, was a move by the Police to enforce the directives on Covid-19 safety protocols to curtail the spread of virus.

The suspects, who were out and about in blatant defiance of the safety protocols, were rounded up by the Police at various locations in Tema.

They were made up of nine females and 96 males between the ages 17 to 64 years, and out of the total number, 22 of them had no masks at all, while 83 of them possessed masks but flagrantly refused to wear them.

Police Chief Inspector Stella Dede Dzakpasu, Acting Public Relations Officer, Tema Regional Police Command, who disclosed this in a statement on Wednesday, said “some of the suspects called friends and relatives to bring them masks while in police custody.”

She said, the suspects were currently being screened at the Regional Police Command after which further action would be taken.

The Command, she warned, would not countenance the noncompliance of the protocols and called on the general public to be guided and strictly observe the protocols to prevent the spread of the virus.

President Akufo-Addo in his last address to the nation on measures taken against the spread of the Covid-19, instructed the Police to rigorously enforcement laws on wearing masks at all public places and in public transport.

Our leaders should swear with eggs that they’re against LGBT...
20 minutes ago

Check what Supreme Court said about key issues in the dismis...
41 minutes ago