The freedoms ushered in by Egypt's iconic demonstrations in 2011 were short lived. By Mohamed el-Shahed (AFP/File)

A decade after Egypt's mass protests briefly unlocked new freedoms, human rights groups say it is back to square one as President Abdel Fattah al-Sisi has stamped out all opposition.

The iconic demonstrations in Cairo's Tahrir Square, which broke out on January 25, 2011, toppled autocrat Hosni Mubarak just a couple of weeks later in one of the most momentous changes of the Arab Spring wave of revolts.

They ushered in a heady period of free speech and free elections that propelled Islamist Mohamed Morsi to power, followed by mass protests against Morsi and then his overthrow -- all within two and a half years.

Spearheading the second regime change in 2013, former army chief Sisi has since presided over a crackdown against Islamists, secular opponents, journalists, lawyers, artists and intellectuals.

"The Arab Spring in Egypt was short-lived," Agnes Callamard, a special rapporteur on extrajudicial killings to the UN, told AFP.

"The regime has learnt the worst lesson -- to nip any hint of freedom in the bud."

In early December, Amnesty International deplored a "frenzy" of executions in Egypt, the Arab world's most populous country.

Faced with such international criticism, the response of Egyptian authorities has invariably been the same -- to reject outside interference.

Human rights questions in Egypt are "the responsibility of the society concerned and not of external parties," Foreign Minister Sameh Shoukry told a recent press conference.

His ministry, in a statement to AFP, denied the use of arbitrary arrests or torture in Egypt, said there are "no political prisoners" and stressed that the government "attaches great importance to the freedom of opinion and expression".

The wave of repression began in the summer of 2013, when hundreds of Islamists protesting against Morsi's overthrow were killed by security forces in Cairo, according to various rights groups.

Arbitrary detentions, mass trials and death sentences followed for members of the Muslim Brotherhood, which was banned once more from 2013.

The power of Sisi -- who was elected president a year after bringing down Morsi and re-elected in 2018 with more than 97 percent of the official vote -- has only grown stronger. 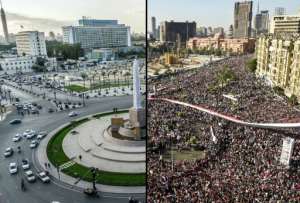 Human rights groups say it is back to square one in Egypt, a decade after mass protests briefly unlocked new freedoms. By Khaled DESOUKI, PEDRO UGARTE (AFP/File)

In April 2019, a constitutional amendment prolonged his presidency and tightened his control of the judiciary.

Rights groups say around 60,000 political dissidents now languish behind bars, despite the government's insistence there are no political prisoners in Egypt.

In September 2019, hundreds of protesters demanding Sisi's departure again tried to mobilise in Tahrir Square, but this initiative only provoked a wave of arrests.

The judicial system, at the heart of the repressive apparatus, is often deplored by rights groups for resorting to charges of "terrorism" and "disseminating" false news -- offences that carry prolonged sentences.

"The judiciary is supposed to be a castle... that protects rights and freedom," said Mohamed Lotfy, director of the Egyptian Commission for Rights and Freedoms.

But in Egypt it "is rarely able to hold to account any officers" from the security forces, and even in cases with damning evidence, sentences are lenient, he added.

Authorities often cite the threat of "terrorism" when faced with accusations of rights abuses, in a country grappling since 2013 with a jihadist insurrection in North Sinai.

Sherif Mohyeldeen, a scholar on Egypt and North Africa at the Carnegie Middle East Center in Beirut, said the reported abuses contribute to "fuelling the structural violence and partly cultivate extremism".

'It will take time'

Egypt's media has also been repressed, with hundreds of internet news sites shut down since 2017.

Few independent media organisations are left for those journalists "who are not already behind bars," said Lina Attalah, editor in chief of Cairo-based online newspaper Mada Masr. 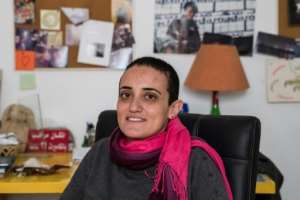 "Mada is really an exception," added Attalah, who has herself been arrested several times.

Some media outlets have been acquired by entities close to the powerful military, which controls swathes of the economy.

A state of emergency, in place since 2017 and reinforced in May 2020 during the initial wave of the coronavirus pandemic, is seen as a covert tool for exercising new repressive powers.

That repression took a new and spectacular turn in November, with the arrest of three activists belonging to a local rights organisation after a meeting with Western ambassadors.

It was only after a rare outcry by a plethora of powers that the three were released.

The authorities have also targeted women. Around a dozen social media influencers have been detained in recent months for sharing content on TikTok deemed to debase moral standards in the conservative country.

Mokhles Kotb, secretary general of Egypt's National Council for Human Rights, told AFP it will "take time to institute the rule of law".

Election Petition: I disagree with process of trial and ruli...
42 minutes ago