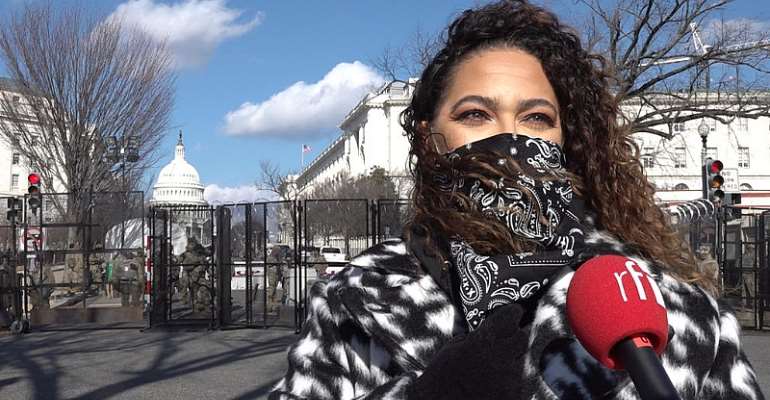 As Joe Biden took office in Washington DC on Saturday, a small trickle of onlookers – some wearing slogans of support – fronted up to the US Capitol in the hope of at least hearing the ceremony that was broadcast live to millions around the country.

Forced to remain across the street from the barricaded “Green Zone”, most people watched on their phones as Biden delivered his message of unity just a few hundred metres away.

Others just stared at heavily guarded monument in disbelief.

“This doesn't feel like an inauguration, it feels like war,” one person told RFI. Some said they had wandered around the perimeter for hours searching for the best vantage point so they could feel closer to the event.

“I know that has been discouraged this year, but we really wanted to come here and be a part of this change – and also to try and be respectful of the barriers.”

Following unrest that saw the city go into unprecedented lockdown for the inauguration, Biden has promised to be a president for all Americans.

“This is a day of history and hope … We've learned again that democracy is precious; democracy is fragile. And at this hour, my friends, democracy has prevailed,” he said.

Modern Ghana Quote Reports
Catch up with all the political quotes from our politicians.
Sponsored
More US & Canada
Modern Ghana Links
More Americans are identifying as LGBTQ than ever before — Poll
Tiger Woods undergoes surgery after car crash in LA
AHRC holds its First Virtual Zoom Discussion of 2021
Half of Americans want Senate to convict Trump
PDL welcomes Joe Biden's American Presidency
Larry King, giant of US broadcasting, dies at 87
US virus deaths top WWII fatalities as Biden warns worst yet to come
Biden calls for unity as sworn in as 46th President of United States
Biden sworn in as 46th US President
Quote Reports Dossiers
TOP STORIES