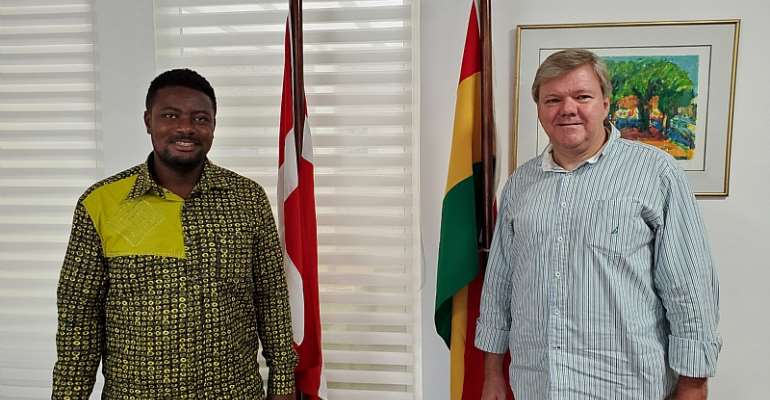 In September 2020, His Excellency Tom Nørring, an accomplished career diplomat who has received prominent awards over the years was appointed the Ambassador of Denmark to Ghana.

Ambassador Nørring also served as the Human Resource Director at the Danish Ministry of Foreign Affairs – and before that he served for 2 years as the Deputy to the Danish Minister for Nordic Affairs. His early postings included the Danish Embassy in Washington and the Danish NATO delegation in Brussels.

I was privileged to have been hosted by Ambassador Nørring at the Embassy of Denmark in Accra just before the Christmas holidays. Our edifying conversation focused on his participation in Ghana’s Election 2020 as a member of the European Union Election Observation team, his journey as a career diplomat, and the direction of the Denmark Embassy under his leadership.

The diplomat who describes himself as positive in nature, even sometimes a happy-go-lucky person, gave his impression about Ghana’s Election 2020. “I was happy about the orderly and peaceful manner in which the election was carried out. The conduct of the election was very good and the attitude of the election officials, that I met, was commendable. They were well prepared, knew their task and were ready for us as well as the voters. Admittedly there were little things that could have been done differently just as there unfortunately were reports of pockets of violence in some areas, but in general , I will describe the overall process as peaceful”, he said.

As he narrated his upbringing and formative years, it became obvious that becoming a diplomat was a childhood dream and definitely not an accident. “I was a lucky young man at nine years when my father, an officer in the Danish army was posted to the United States of America for one year. It was a mind blowing experience for me, a totally new world for me and I loved every bit of it. It got under my skin and I started to fancy the idea of traveling around the world”, he revealed.

“I would later travel to the United States but this time for studies. This fed my appetite for a career that would enable me to work abroad and be able to travel and see the other parts of the world. Being a diplomat allows for that, and I can boldly say that was the motivation for aspiring to become a diplomat at the time”, he added.

Ambassador Nørring has no regret for making that career decision as he spoke about his diplomatic journey which started in 1987. “I have had a fantastic ride I think and I have been lucky to have been to some wonderful places on the surface of the earth and also had some delightful experiences. I remember planning a state visit of the Danish queen to the USA, which was a lot of work but absolutely an amazing experience. On the other hand, there are times when it gets difficult, especially when you have to make some bold and tough decisions”, he explained.

As the official representative of the government of Denmark in Ghana and the head of the Embassy of Denmark in Accra, he mentioned that his priority will be on how to phase out development cooperation this year and focus more on trade.

“My mission here is Ghana is to ensure that the already very good bilateral relations between Ghana and Denmark are strengthened at all levels. Currently we are phasing out our traditional development assistance, but very importantly at the same time we are finding alternative ways to ensure that we remain engaged and continue to contribute to the development of Ghana, however with a relatively lesser amount of money. We will continue to work with the government, civil societies and other group of people, but increasingly through partnerships, transfer of knowledge expertise and technology, thus building capacity in Ghana”, he further stated.

Ambassador Nørring indicated that the shift in focus of the cooperation falls directly in line with the Ghanaian Government’s “Ghana Beyond Aid” agenda. He is optimistic of leading the charge to ensure a smooth transition which will see the growth in the relationship between both countries.

On specific projects, Ambassador Nørring mentioned that “we are now going to have a sectorial approach and work with experts to build up capacities in Ghana and bringing in the requisite technologies as part of the agenda to focus on trade. We are definitely building on the past and one of the areas we are working on is water solutions. Our water companies are here in Ghana and working on helping to curtail the huge waste in the water supply structure, from the source till it gets to the consumer, and to ensure a future with clean and affordable drinking water to all in Ghana”.

Other areas, where we see an increased Ghana–Denmark collaboration, are according to the ambassador statistics and maritime. “Something a lot of people don’t pay attention to statistics which is important for government to make the right decisions. We have built up a very close cooperation between Denmark statistics and Ghana statistics and this is to help in strengthening the work of general statisticians in Ghana”, he explained.

Finally, Ambassador Nørring mentioned the maritime sector indicating that there are two components as part of the cooperation: “The first is the civilian cooperation with the Ghana Maritime Authority and the Ghana Ports and Habours Authority and their counterparts in Denmark. At both the management and technical expert level, we are building up capacity and helping with all the things you need to have at the ports in order to function more efficiently. And not least are we working very closely with the Ghanaian authorities on maritime security to ensure that there is safe passage for ships in the Gulf of Guinea at all times”.

In wrapping up our conversation, Ambassador Nørring repeated his optimism about the prospects for strengthened bilateral relations between Ghana and Denmark in the coming years. 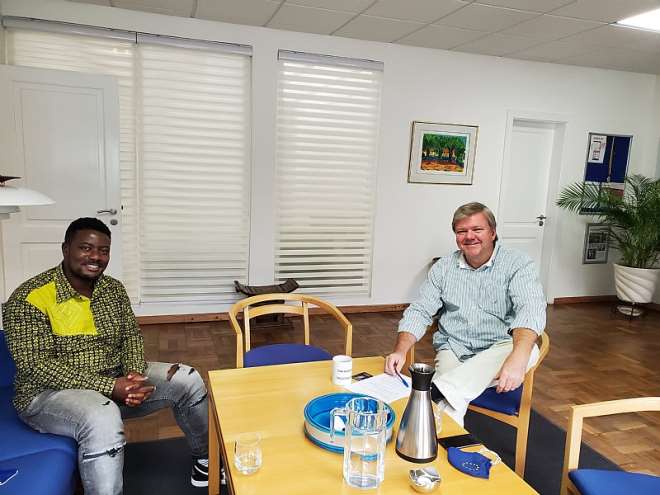