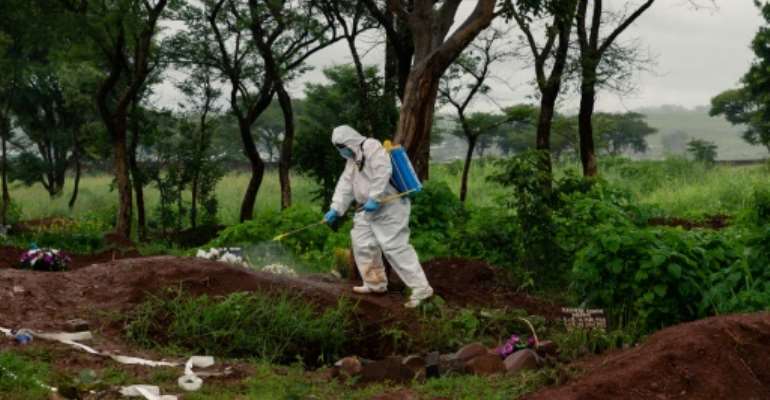 The government has defended its decision to limit funeral rites, pointing to the worsening coronavirus outbreak. By Jekesai NJIKIZANA (AFP)

Only a handful of sobbing relatives huddle together, heads lowered in sorrow, as cemetery workers in hazmat suits hastily shovel dirt over a coffin in Zimbabwe's capital Harare.

Fifteen minutes later the family must leave the cemetery. To minimise coronavirus risks, none of the usual funeral rites are permitted, not even a brief eulogy.

Families may not transport deceased relatives between cities -- one of several traditions believed to be increasing the spread of the disease -- unless they are contained in expensive, hermetically sealed coffins.

The dead must be buried where they pass away, regardless of their family's location, with barely any of the usual body-viewing ceremonies, sung prayers and speeches.

"It is so disturbing to see families breaking down from a distance... wanting so hard to be part of proceedings and perform the usual rituals," said gravedigger Ngonidzashe Machawira as the group filed silently out of Glen Forest Cemetery.

The new directive has angered Zimbabweans, particularly in Harare, where many residents have left family far away in order to work in the city.

Traditionally in the southern African country, people are buried close to their kin, as it is believed that dead relatives watch over the family home.

Burying loved ones abroad or in a city far from their rural home is considered undignified.

"It is against our culture to be buried by strangers in the midst of strangers. We want to be buried among our ancestors," said Harare resident Kepekepe, 49, who did not wish to give his full name.

"It is unheard of that an adult is buried by only a few people," he added.

"The government should just make sure that precautionary measures... are maintained during such gatherings (funerals)." 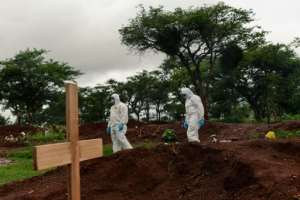 For mourners at Glen Forest, being unable to bury a loved one in the countryside is yet another source of ire on top of grinding economic hardships that have been compounded by the coronavirus pandemic. By Jekesai NJIKIZANA (AFP)

For mourners at Glen Forest, being unable to bury a loved one in the countryside is yet another source of ire on top of grinding economic hardships that have been compounded by the coronavirus pandemic.

Zimbabwe has suffered from decades of economic mismanagement that has drastically inflated prices and crippled the healthcare system.

"The respect for our dead relatives is all we had (left)," fumed a man in his thirties who did not wish to be named, walking back to his car after his father was buried in a matter of minutes.

"This insensitive government, devoid of all connection to our lived realities, has decided to take it away," he said.

"They failed to put measures to stop coronavirus coming back into the country and now they want to punish us for their failures."

Like several other African countries, Zimbabwe is grappling with a second wave of coronavirus that is more serious than the first.

New confinement measures were imposed this month as the number of confirmed cases rose over 27,000, including more than 700 deaths -- figures believed to be widely underestimated because of a lack of testing.

The government has defended its decision to limit funeral rites, pointing to the worsening coronavirus outbreak.

"We are in unusual days, where we are fighting for our very lives," said government spokesman Nick Mangwana.

"Those allowed to attend a burial will still go back into the community and might have contracted the disease," Hafandi told AFP. "They are not tested before or after burial." 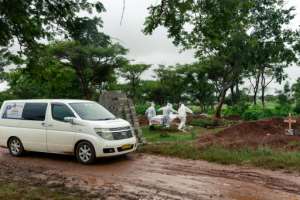 Most funeral parlours do not offer hermetically sealed coffins, which are too expensive anyway for most Zimbabwe city dwellers. By Jekesai NJIKIZANA (AFP)

"If properly sealed a dead body is not harmful," he added. "Maybe they should only ban body-viewing."

The backlash forced authorities to relent last week with a decision to allow bodies to be carried between cities as long as they are "hermetically sealed in triple coffins".

But most funeral parlours do not offer that option.

Hermetically sealed coffins are too expensive for most Zimbabwe city dwellers, many of whom work in the informal sector.

"This is normally done when transporting bodies from other countries," noted undertaker Chengetai Jones at Harare's First Funeral parlour.

"In this Covid-19 era, we only wrap the body in plastic first before placing it in a coffin."