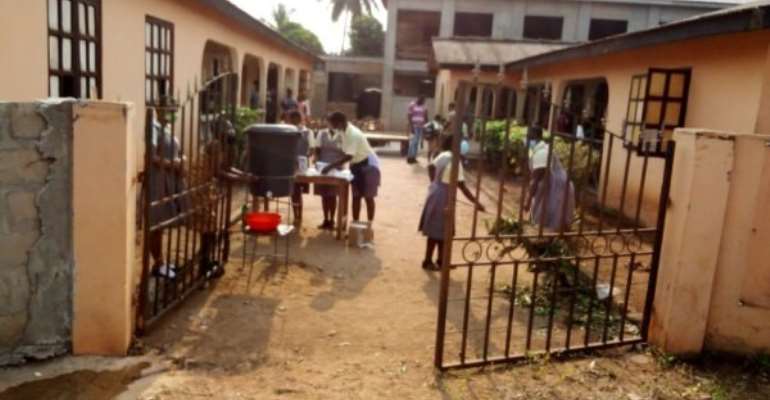 The Akatsi Chapter of the Ghana National Association of Teachers (GNAT) has expressed worry about the unavailability of personal protective equipment (PPEs) on the first day of school re-opening in Akatsi South.

Schools within the Akatsi South Municipality have re-opened as most of them, including the private schools, were seen engaging in clean up exercises to keep their premises clean for academic activities to commence.

But GNAT has indicated the delay in the distribution of the needed PPE to the various basic schools in the Municipality could compel them to call for suspension of school activities until things were rightly done.

Mr Prosper Agbeli, the Akatsi branch Chairman of the Association in an interaction with the Ghana News Agency at Akatsi, lamented "the situation leading to the delay in distributing the PPE must be resolved quickly by the Education Directorate or else, we suspend school activities."

He said the majority of teachers reported at post on Monday but pupils' attendance were not encouraging.

Again, he said some pupils from the public Schools failed to wear their facemasks.

However, checks from the Akatsi South Municipal Education Directorate by the GNA revealed that the PPE would soon be distributed to all schools.

Some parents the GNA interacted with, expressed fear about the rising number of infections of the Coronavirus virus.

They appealed to school authorities to expand their monitoring coverage for safety protocols to be adhered to by all pupils.

A visit by the GNA to some private schools however revealed that pupils have been complying with the directives given them.

At Artcom Academy, Veronica buckets, temperature guns, hand sanitisers among others were placed at vantage points of the school.

Some other private schools the GNA visited include, Ami Preparatory School, Kingship Academy and Wisdom School.

Mr Godson Tome, the proprietor of Kingship Knowledge Academy, said all the safety protocols needed at the School have since been provided and adherence is high.