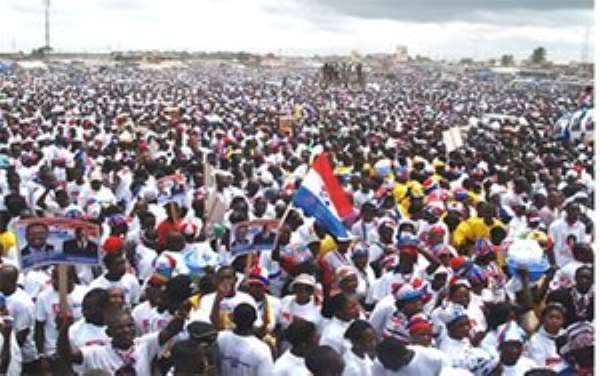 Mr. Chairman S. B. Kangbereye, I just watched a Facebook video and read the statement of funded protesting hooligans as well, and I have to admit, it is a shame to have such in our political climate, in reality, the most irresponsible strategy.

My personal inclination and conviction, while not supported by any empirical evidence but through continuous observation and monitoring from the time of regional executive contest, which marks the genesis of your policy in the region. Much of such indecent language was seen during the parliamentary primaries under your leadership and now the appointment of government appointees. There is a clear demonstration of a steady rise in the degree of indiscipline in the party. In reality, you seem to be the originator of the party's unfortunate development in the area. It is on record that you won airtime for small boys during the provincial elections to go and taunt the party's elders for a reward.

Mr. Chairman, the 5 seats you inherited were not achieved by such crude inferior tactics disposition.

Mr. Heavyweight Chairman, I honestly came to this painful conclusion based on your association with the behavior of those programmed minded gangsters acquired on your agreement to some of the statements they made by your silence. They mentioned Clearly that, before any appointment is made in the country, you are the only regional chairman who is not always Consulted by the president. In the first place, how did the group get to know this, granted is even true?

Your silence and that of your vociferous regional communications officer led to a single conclusion that your mission was accomplished by your induced group. Sir, as a leader, this is very sad and unfortunate on your part!

*Now to the used agents.* In their private, public and academic lives, the two gentlemen whose reputation and dignity you have tried to injure have impeccable records.

The Hon. regional minister, Dr. Hafiz Bin Salih, is from a noble, well-trained and more esteemed home/family here in Wa and is a holder of Ph.D.

Dr. Hafiz Bin Salih has worked for both party and government with distinction; a fact no one can dispute.

The Hon. Issahaku Moomin, the municipal Chief Executive, is a Chartered accountant by international standard and has been employed for many years since joining mainstream politics.

The saddest and most pitiful discovery is that most of these gangsters have simply truncated their schooling at the Senior High School level. They have, unfortunately, readily offered themselves to be exploited by novice leaders instead of enhancing their performance to advance their education.

For your knowledge, the president knows NPP more than you and myself. He has been working with these people since the time of opposition. This should be sufficient to explain to you that, your shameful act would in no way impact the president's decision on his appointments in the Upper West Region.

By: A true Patriot

Election Petition: I disagree with process of trial and ruli...
45 minutes ago