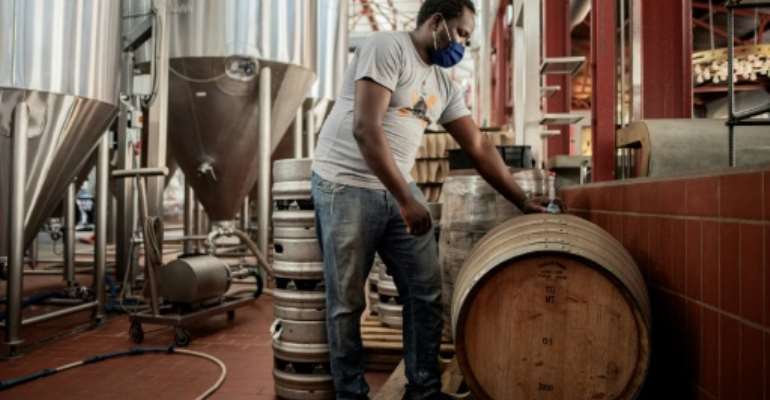 Some breweries fear the industry may never recover after the alcohol ban.. By Luca Sola (AFP)

"This place is definitely not what it used to be," said Eben Uys, gently wiping the dust from the counter of his bar.

Like more than 200 South African microbrewery and restaurant owners, Uys is fighting to keep his business afloat after a new ban on alcohol sales to combat the soaring numbers of coronavirus cases.

But like some others he has managed to adapt to survive.

The 36-year-old chemistry graduate runs trendy bar and restaurant Mad Giant Brewery in the smart district of Newtown, in the heart of South Africa's economic capital of Johannesburg.

Today, his business is at a virtual standstill. He has nine staff instead of roughly 40 in normal times. 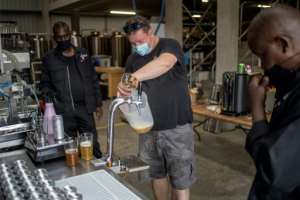 Julian Pienaar (C) has trained some of the employees of his brasserie-restaurant to bottle and pack beer cans. By Michele Spatari (AFP)

"What happened? Covid happened," he said.

It's now less a question of how to make money, he said, but of "survival."

"Every day you wonder how many days you have left and you just hope that something is gonna come in and just get you and buy you another day or another week."

His beer barrels are full. In a few months, if the ban on the sale and consumption of alcohol is not lifted, the beer will all be poured down the sewers.

South Africa is by far the worst hit country in the continent, with more than 1.3 million coronavirus cases and over 36,000 deaths. 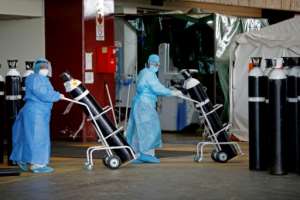 South Africa has been badly hit by coronavirus. At the Steve Biko Academic Hospital in Pretoria, health workers take oxygen tanks into a temporary ward for Covid patients. By Phill Magakoe (AFP)

Last March, it was one of the first countries to ban alcohol sales to fight the pandemic, and President Cyril Ramaphosa last month reimposed the measure as the second wave hit.

Beer is the most popular alcoholic drink in South Africa, and some of the local manufacturers, who employ around 30,000 people, fear the industry may never recover.

Already, 30 percent of the 215 microbreweries in the country have had to close their doors since the first ban, according to the Craft Beer Association South Africa.

But some have found imaginative ways to convert their businesses to survive, at least temporarily.

In Benoni, about 40 kilometres (30 miles) east of Johannesburg, Julian Pienaar has trained some of the employees at his brasserie to fill and pack beer cans.

In the middle of the room, behind a small improvised assembly line, former chef Sipho Nkomo puts lids on aluminium cans. 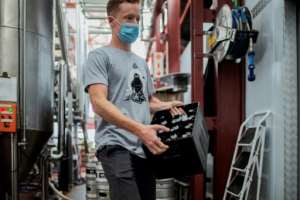 Uys said he is fighting to keep his business afloat after the new alcohol ban. By Luca Sola (AFP)

"It's been hard, you do a thing with passion and all of a sudden you're doing a new thing and you don't even have a clue", said Nkomo.

Uys has switched to producing hand sanitizers. During the first wave of the pandemic, this business allowed him to stay afloat.

But this time it's harder.

"When you spray a little bit in your hand that's just a couple of millilitres, when you drink a beer that's 500 ml (a pint)," he said. 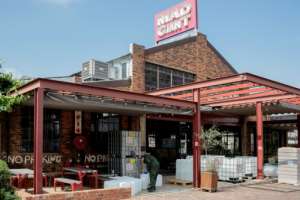 A worker fills a jerrycan of sanitiser at the Mad Giant Brewery, in Newtown, Johannesburg. By Luca Sola (AFP)

"The ban on alcohol kills the business and it's not going to cure the Covid," complained CBASA president Wendy Pienaar.

South African Breweries, one of the country's largest, announced Friday is has cancelled a 136-million-euro ($164 million) investment planned for this year.

"South Africans are paying with their lives and their jobs because President Ramaphosa and his ministers have not done what they promised us they would do" in tackling the pandemic, the main opposition Democratic Alliance said in a statement.

It said 165,000 people have lost their jobs in the drinks industry.