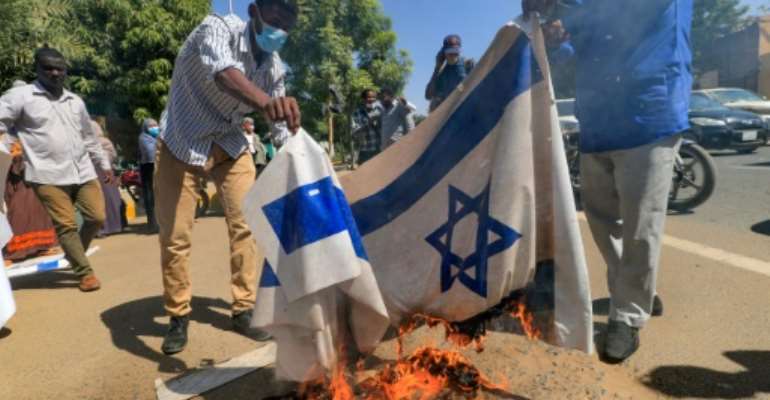 Sudanese demonstrators burned an Israeli flag during a rally against their country's recent signing of a deal on normalising relations with the Jewish state. By ASHRAF SHAZLY (AFP)

Dozens of Sudanese protesters burned the Israeli flag Sunday during a rally against Khartoum's recent signing of a deal on normalising relations with the Jewish state, an AFP correspondent reported.

On January 6, Sudan became the third Arab country to sign the US-brokered "Abraham Accords" on normalising ties with Israel after the United Arab Emirates and Bahrain last year.

Morocco has also agreed a US-sponsored "normalisation" with Israel that restores past relations.

The protesters, who said they belonged to an anti-normalisation group, also carried banners reading "down with Abraham accords" and "Abraham Accords are American blackmail in exchange for submission".

Sudan signed the accords less than a month after Washington removed Khartoum from its "state sponsors of terrorism" blacklist as part of a quid pro quo for the East African country normalising ties with Israel.

In October, Khartoum said its deal with the Jewish state would only come into force after its approval by a yet-to-be-formed parliament.

The country has been undergoing a rocky transition since the army toppled long-time president Omar al-Bashir in 2019 following months of mass protests against his rule, triggered by economic hardship.

The transitional administration, which took power months after Bashir's ouster, has been pushing to rebuild the country's economy beleaguered by decades of US sanctions and internal conflict.

It has sought to boost its international standing by forging closer ties with the US, as it grapples with a deepening economic crisis exacerbated by the Covid-19 pandemic.