Trump is out, but US evangelicalism remains alive and well in Africa

By Dion Forster - The Conversation 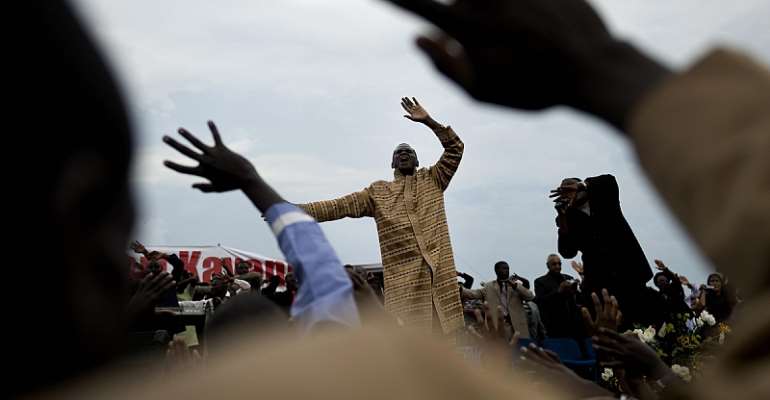 An evangelical outreach in Uganda led by the prominent and wealthy pastor Robert Kayanja. - Source: WALTER ASTRADA/AFP via Getty Images

On the day before the 2020 US presidential election, Reverend Kenneth Meshoe, the leader of the African Christian Democratic Party in South Africa, tweeted :

Please pray… for President Donald Trump to be re-elected….

It seems bizarre that a black African Christian would support an overt racist who disdains people who come from “ shithole countries ”.

Meshoe exemplifies a type of political and theological reasoning among African evangelical Christians. He was praying for Trump's victory because he echoes the views of many African evangelicals in relation to human sexuality, reproductive rights (anti-abortion), nationalism and capitalism. For example, Bishop Mark Kariuki of the Evangelical Alliance of Kenya claimed that a Trump victory would be a vote in favour of “good morals”.

According to Harvard researcher Damaris Parsitau, such views are shared by evangelical leaders in Nigeria, Ghana, Liberia and Uganda.

How could this be?

The support of African evangelicals points to a bizarre cocktail of politics, economics and religion on the continent, which could have long-lasting negative consequences.

The dangers of Trumpism

Trump may be leaving, but the thinking that brought him to power, “ Trumpism ”, is alive and well among the world's fastest-growing Christian community – African evangelicals. “Trumpism” loosely denotes views on identity politics, nationalisms of various kinds and a series of reason-defying beliefs. Fuelled by secretive global organisations such as QAnon , there is also a strong dose of science denialism about climate change and COVID-19 .

Sadly, it is the world's poorest citizens, among them Africans, who suffer most from the effects of climate change , US trade policies that increase global inequalities , racism and sexism.

This is very concerning . We have seen black evangelicals undermining racial justice campaigns like #BlackLivesMatter . They have pressured their governments to support the state of Israel, despite its atrocious human rights record in Palestine. And many fall in step with American evangelical theology on the denial of LGBTI rights and the curtailing of women's reproductive rights .

The spread of American evangelicalism

resonates both with the spirituality of Africa and the materialism and individualism of modernity.

Experiential religion – characterised by healing, miracles and visions – is part of the African religious experience. It predates the arrival of Christian missionaries.

“Third wave” evangelical Christianity arrived in Africa from the US in the early 1900s. At the time it was more appealing than the dry and reasoned “second wave” faith brought earlier by Catholic and Reformed missionaries.

In addition, the arrival of US evangelicalism coincided with the historical emergence of materialism and individualism, which characterise modernity. This led many African Christians to adopt the economically abusive practices of prosperity doctrine preachers.

They claim that wealth is the will of God and frequently scam and impoverish some of the poorest African communities. They were taught this by American Christians .

Lastly, African evangelical ministries are funded from the US. In addition, many were trained in the US or by US organisations. Meshoe, for example, studied at an evangelical school in Tennessee. Moreover, funding for Africa is often threatened if the moral and political standards of high ranking American evangelical politicians and lobbyists are not adhered to.

The American Dream is a global nightmare

American evangelicalism has always been allied to the notion of “The American Dream” and the myth of the founding of America. This political theology claims that God established the US as an “ exceptional ” nation that overcame tyranny with God's help through the American Revolution .

Since then, it has been spreading its ideology globally – often using evangelicalism to do so. “God bless America” is a well-known phrase. In the minds of many Americans, God is on their side and wants America to succeed over all other nations.

Let these United States of America be that beacon of hope to all people and nations under your dominion, a true hope for humankind …

Trump's God is an American God , seeking to spread American values, politics and economic ideals across the world. But the God of historical Christianity does not prefer Americans over other nations.

Religion, politics and money are deeply intertwined among Trump-supporting African evangelicals – and dangerously so. American evangelicalism is part of the “software” that allows the “hardware” of American exceptionalism to spread throughout the world.

Read more: Pentecostals and the spiritual war against coronavirus in Africa

Many African evangelical leaders receive funding from US bodies. Many fall in line with the Trump government's views on abortion, homosexuality, science and Christian Zionism. Like their American evangelical counterparts, they are also learning to put pressure on their governments. But the values of white, middle class US evangelicals are at odds with the freedoms sought by Africans.

To free Africa from Trumpism, African scholars and thinkers must critically examine the influence of American evangelicalism on the growing number of African evangelicals.

Modern Ghana Quote Reports
Catch up with all the political quotes from our politicians.
Sponsored
More Article
Modern Ghana Links
Western Sahara, Africa's last colony, to resume liberation struggle on hold Since 1991
Violence is endemic in eastern Congo: what drives it
Pasha 98: Why it's important to understand how much water is in the Nile river
A new advance in the search for substances to replace fat in food
Nigeria isn't big on 3D printing. Teaching students how to use it could change this
Local government in South Africa is broken: but giving the job to residents carries risks
The Actionability of Sustainable Development and Social Change: A Rural Community Perspective
Are we failing children in the HIV response?
The CIO Diaries: Resilience Beyond Digital Transformation
Quote Reports Dossiers
TOP STORIES

'Visit our lands again and we'll visit mayhem on you' — Chi...
15 minutes ago