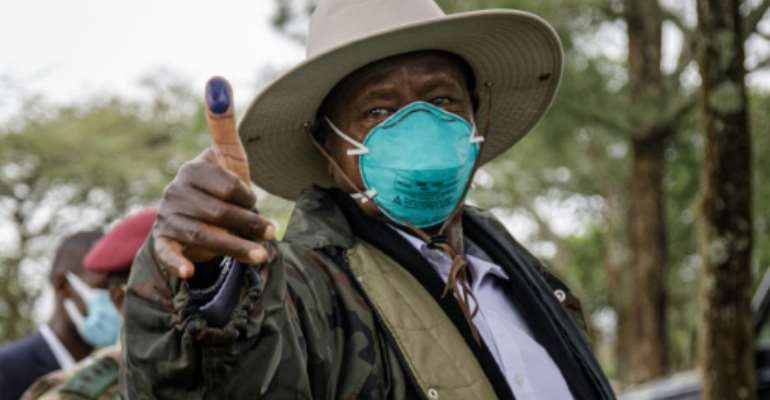 Museveni, who took power in 1986, is one of Africa's longest serving presidents. By Badru KATUMBA (AFP/File)

Uganda's Yoweri Museveni has won a sixth term in office with almost 60 percent of votes, in an election his main rival Bobi Wine has said was marred by fraud and violence, the electoral commission announced Saturday.

The veteran leader, who took power in 1986, is one of Africa's longest serving presidents, and faced a stiff battle from the 38-year-old former ragga singer whose turn to politics fired up the youthful population.

Wine was under heavy guard at his home on the outskirts of Kampala as results were announced, with his party saying he was under "effective house arrest", while the government said it was merely providing him with security.

The singer-turned-MP was among 10 opposition candidates and came second with 34.8 percent of the votes, behind Museveni with 58.6 percent.

He said turnout was 57.22 of almost 18 million registered voters. 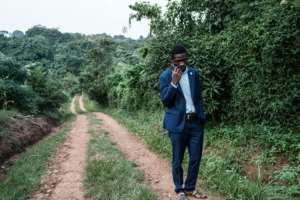 Wine, with his humble origins in a slum and popular songs about economic and social injustice, struck a chord with young people. By Yasuyoshi CHIBA (AFP)

Byabakama urged the population to "remain calm and accept the outcome of these elections" while reminding those celebrating to be mindful of the Covid-19 pandemic.

The election took place after one of the most violent campaigns in years, with harassment and arrests of the opposition, attacks on the media and the deaths of at least 54 people.

While the government said the vote went off peacefully, Wine alleged widespread fraud such as ballot box stuffing and said his party agents had in some places been beaten and chased away from polling stations.

'We don't control them'

Wine's home remained sealed off by soldiers and police on Saturday, after he told AFP Friday evening that security forces had breached the fence around it and he felt under "siege".

"They jumped over my fence. They came inside my compound. I feel threatened," said the 38-year-old.

The army's deputy spokesman Deo Akiiki said the soldiers were there for "his own security and the security of people around him".

However the spokesman for Wine's National Unity Platform (NUP), Joel Ssenyonyi, NUP spokesman says Bobi Wine "is under effective house arrest", and did not rule out protests following the announcement of the vote.

"People are angry because their vote has been stolen. They don't need me or Bobi Wine to tell them to get angry... Even we can't control them."

Police have advised people not to go out to celebrate or protest when results are announced, citing draconian Covid-19 regulations, which have regularly been used to crack down on the opposition.

Museveni has warned that using violence to protest the result would amount to "treason". 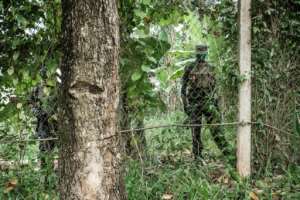 Wine's home remained sealed off by soldiers and police. By Yasuyoshi CHIBA (AFP)

Tibor Nagy, the top US diplomat for Africa, said on Twitter that the vote was "fundamentally flawed", citing the denial of accreditation to election observers and "violence and harassment of opposition figures".

"We continue to urge restraint and rejection of violence by all actors as Uganda's election results are announced. The immediate and full restoration of Internet connectivity is essential."

The internet has been down for four days, and government spokesman Ofwono Opondo said the measure was taken due to "abuse, misuse, disinformation, fake news with the overall objective of undermining the integrity of the electoral process including the results... and possibly to cause destabilisation".

He said the internet would be restored once the threat had passed, possibly on Monday morning.

Museveni has ruled Uganda without pause since seizing control in 1986, when he helped to end years of tyranny under Idi Amin and Milton Obote. He is one of Africa's longest serving leaders. 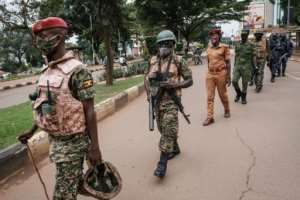 Security forces officers are seen during a joint patrol in a street ahead of the election results. By Yasuyoshi Chiba (AFP)

And for many in the country, where the average age is 16 and most have known only one president, Museveni's glory days are no longer relevant or sufficient.

Wine, with his humble origins in a slum and popular songs about economic and social injustice, struck a chord with young people, but observers said the odds were stacked against him with Museveni's powerful grip on the state. 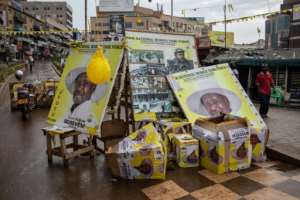 Museveni has warned that using violence to protest the result would amount to "treason". By Badru KATUMBA (AFP)

His NUP is however on track to see his newly formed National Unity Platform (NUP) become the main opposition party in parliament, notably winning eight of nine constituencies in the capital Kampala.

The election took place with no major international observer missions aside from the African Union, with the United States saying too many of its staff were denied permission to monitor the vote.