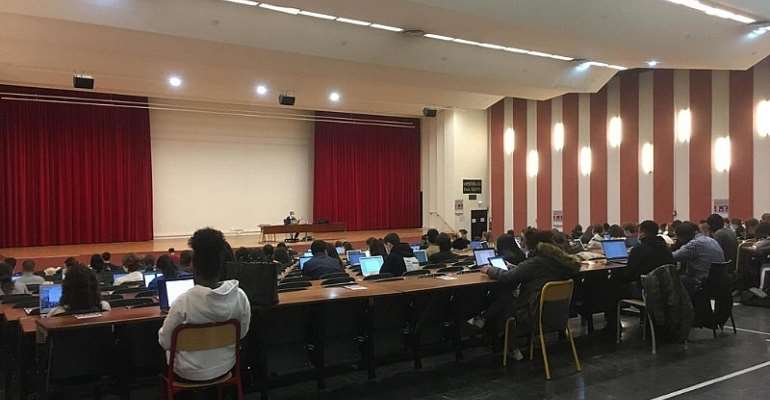 First-year university students in France are to be allowed to start studying again on-site, in small groups, in a bid to address a growing human crisis, but student unions say it may be too little too late. Unable to cope with the isolation of the distance-learning introduced under Covid, students' mental health is suffering and many are dropping out.

Small groups of first-year students will return to learning on-site from 25 January prime minister Jean Castex announced on Thursday evening. And "if the health situation allows" 2nd and 3rd year students could also follow at a later date.

Castex acknowledged the government was “preoccupied” by the “deep sense of isolation”  and learning difficulties students were experiencing after months of exclusively online tuition.

Apart from a brief six-week period from September through to mid-October, university students have been working from the confines of their studios or bedrooms for the last 10 months.

According to the observatory of student life, a third of France's 2.7 million university students are suffering from depression, anxiety and loneliness, and run the risk of dropping out.

In some cases, the situation has turned critical.
On Tuesday evening, a student in Lyon was stopped from jumping out a window of a residence after neighbours intervened. Several days earlier, another student was left in critical condition in hospital after jumping out of a window of a university residence in Villeurbanne, a suburb of Lyon.

The cause of the attempted suicides have not yet been determined, but students, teachers and health workers have long warned about the emotional and academic impacts of prolonged remote learning.

“Like all students, we are socially isolated,” Romain Narbonnet, one of the student's classmates, wrote in a Facebook post. “We are holed up 24/7 in rooms no larger than prison cells [...]. How much can a student endure?” he asked. “It is vital to keep schools open, but somehow universities and students are of secondary importance. The truth is, we've been left by the wayside.”

While living in small spaces with only a computer screen for company is hard for many, living with your family isn't necessarily easier.

“It's a complicated situation,” Elena, a 20-year-old law student in Toulouse told Le Monde, “your parents leave for work each morning, your younger brother goes to school, and we're left totally isolated”.

Student unions bemoan the fact the government has talked far more about the importance of reopening ski-lifts than student well-being.

“The start of university is when you build your social life, you develop, it's a very important period and it's being crippled,” said Cécile Thavenet, a member of the FAGE student union.

Students are also weighed down by the sense of uncertainty caused by the health crisis.

At the end of December, the organisation released a series of Twitter messages advertising a helpline for students.

"Do you need to talk to someone? You're not alone," says Fage on it's Twitter feed, encouraging students to get in touch to reach the free hotlines put in place.

“They don't know what the future will bring, they're afraid about not passing their exams, there's a lot of pressure on their shoulders,” Thavenet said. “And yet they feel they're not listened to or appreciated.”

According to an Iposos poll carried out for Fage after the first lockdown in March-April 2020, 23 percent of students said they had experienced suicidal thoughts.

The union is disappointed that the students' difficulties are falling on deaf ears.

According to Santé publique France health agency, the number of people suffering from depression doubled between the end of September and early November; those most affected are youngsters aged between 18 and 24.

“The 18-20 age group is suffering a lot, we're seeing between 5 and 10 new cases every week,” says Eugenia Mascarenhas, head of psychiatry at Ville-Evrard hospital near Paris.

“Their lives have changed a lot as they have so little contact with friends," Mascarenhas continues. "We've seen an increase in young people who fell out with their families during lockdown. Lots of youngsters who're in extreme difficulty may sometimes end up on the streets.”

Teachers are witnessing the impact full-time distance-learning is having on the most vulnerable students, both on their academic performance and mental health.

“These first-year university students are the most fragile and need the most help, says Stéphane Jettot, a history teacher at Sorbonne University.

"They struggle with academic exercises, with writing, and when they're isolated like this it's even harder for them. We try and do as many classes as possible using webcams, we offer help online, lend them laptops, but we see there's a high drop out rate.

“Judging by the presence on Zoom I'd say a good third have dropped out.”

Jettot believes some may have taken advantage of the growth in delivery jobs for financial reasons "preferring paid work to studying", but the many emails he receives suggest there are also mental health issues.

“We receive a lot of messages from students who have real psychological problems," he says. "They're struggling with solitude and depression. We do what we can but we feel powerless faced with the distress. We don't have the skills.”

The shortage of psychological support within French universities is not helping.

With only one psychologist per 30,000 students, France is far behind a country like Canada where the ratio is one to 3,000.

The government announced on Thursday it would double the number.

“We will go from 80 to 160. But when you bear in mind there are 2.7 million students, that's still too few,” Cécile Thavenet regrets.

“We would like to go back but feel like the universities are not making an effort to get us back into class,” says Blaise Kalfala, a third year student in history and Arab civilisation at the Sorbonne. He cites the fact that when classes resumed in September last year the protective health measures to fight spread of the virus were flimsy to say the least.

“Apart from wearing masks, we were in normal amphitheatres, sitting next to one another as usual," he says. "It's a pity they reopened in September without those real preventive measures. We ended up closing six weeks later. It just isn't cool."

“Some teachers are very understanding, but the administration really hasn't taken into consideration the difficulties and fatigue students are facing."

“It's a dramatic situation,” Green MEP Yannick Jadot told France Inter radio on Thursday. “We're sacrificing our young people. The universities have to be opened with strict health measures in place so that youngsters can get out. If not, the number of suicides will explode.”

The government's promise to let small groups of first-year students return to on-site learning will go some way to alleviating the isolation.

But for Marianne Pouchtout, vice-president of the Unef student union, groups of 10 students “won't be enough.” “It's a drop in the ocean,” she said.