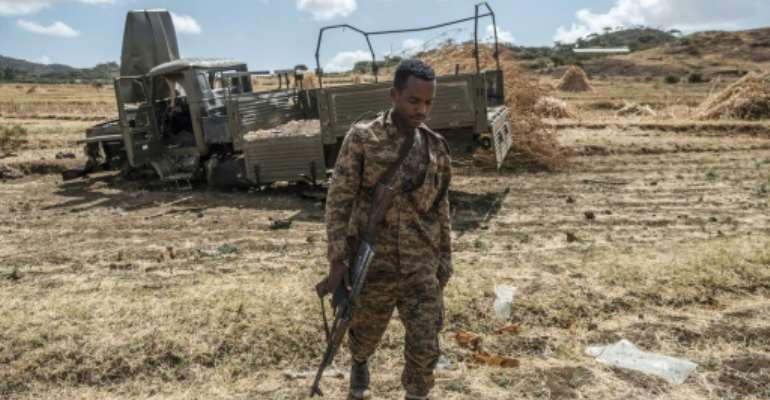 Thousands have died in the fighting in Ethiopia's northern Tigray region. By EDUARDO SOTERAS (AFP/File)

Thousands have died in the fighting, according to the International Crisis Group, and tens of thousands of refugees have streamed across the border into Sudan.

"The situation on the ground goes well beyond a purely internal 'law and order' operation. We receive consistent reports of ethnic-targeted violence, killings, massive looting, rapes, forceful returns of refugees and possible war crimes," Borrell wrote in a blog post.

"More than two million people have been internally displaced. And while people are in dire need of aid, access to the affected region remains limited, which makes it very difficult to deliver humanitarian assistance."

Brussels in December said it was postponing some 90 million euros ($110 million) in aid to Ethiopia over its failure to grant full humanitarian access to the region.

Borrell said he told Ethiopia's Foreign Minister Demeke Mekonnen in a call last week that "in particular in the absence of full humanitarian access to all areas of the conflict, we have no alternative but to suspend" the funds.

"I have passed a clear message to the Ethiopian leadership: we are ready to help, but unless there is access for humanitarian aid operators, the EU cannot disburse the planned budget support to the Ethiopian government," he wrote.

"It is in the best interest of Ethiopia and the wider region to allow humanitarian access and to resume the path towards an inclusive and sustainable peace," Borrell wrote.

The United Nations on Friday said it was "alarmed by the continued reports we receive of civilians being injured and killed during fighting in rural areas of Tigray, and we are deeply concerned about the plight of hundreds of thousands of people who have still not received assistance in Tigray more than two and a half months since the conflict began".

The UN's Office for the Coordination of Humanitarian Affairs said aid groups had managed to deliver aid to some areas, including mainly cities, but "the number of people reached is very low compared with the number of people we estimate to be in need of assistance, around 2.3 million people".