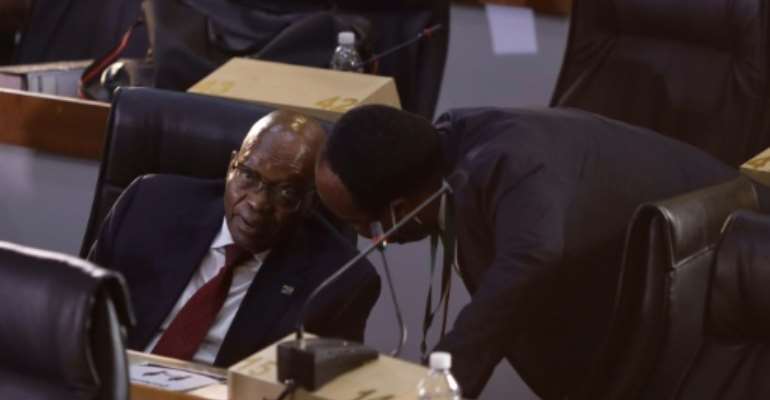 Zuma, pictured at his appearance before the commission last November. By Guillem Sartorio (AFP)

South Africa's ex-president Jacob Zuma will not appear before a judicial panel probing alleged graft during his time in office, his lawyer said Friday, despite a court application seeking to compel him to testify.

Zuma, 78, has played cat-and-mouse with the commission since it was set up in 2018 to investigate looting of state coffers during his nine-year tenure.

The former leader has only testified to the panel once, in July 2019, but pulled out after a few days, saying he was being treated as an "accused" rather than as a witness.

He reappeared briefly before the commission in November to demand that the its chair, deputy chief justice Raymond Zondo, recuse himself.

The exasperated panelists issued a fresh summons starting on January 18 and filed an urgent Constitutional Court application to oblige him to comply.

But Zuma's lawyer Eric Mabuza on Friday told AFP the ex-president would not be appearing next week.

In a WhatsApp message, Mabuza explained that his client was waiting for the Constitutional Court to respond to the commission's application.

He is also holding out for the outcome of an application to set aside Zondo's refusal to recuse himself.

"We have informed the commission that President Zuma will not be appearing on Monday," Mabuza confirmed.

Zondo has not yet reacted to the announcement, which was widely expected.

Zuma, who became president in 2009, was forced to resign in 2018 over graft scandals centred around an Indian business family, the Guptas -- who won lucrative contracts with state companies and were allegedly even able to choose cabinet ministers.

He was succeeded by President Cyril Ramaphosa, who has vowed to confront the "scourge" of corruption.

So far at least 30 witnesses have directly and indirectly implicated the former leader.

In the latest summons, he had been called to testify from January 18 to 22 and again from February 15 to 19.

Zuma is meanwhile also facing trial for allegedly receiving bribes in a multi-billion rand arms deal in 1999, when he was deputy president.

That trial is now scheduled to resume in February after postponements.