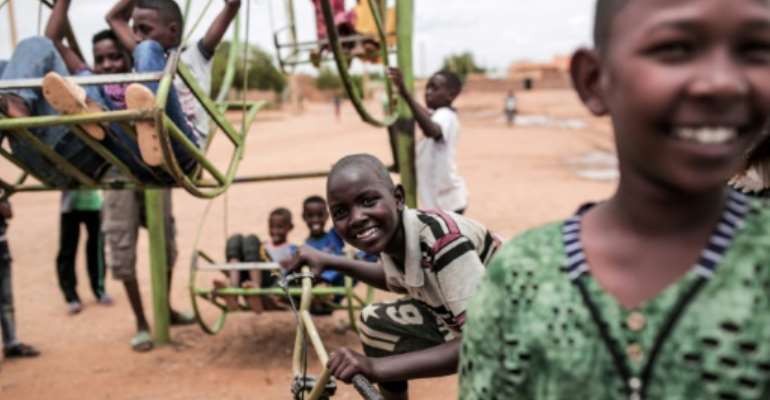 As Sudan's transitional government shifts the nation from the Islamist rule of ousted strongman Omar al-Bashir, a new school book has sparked controversy for reproducing Michelangelo's iconic "Creation of Adam."

Khartoum's government has embarked on deeply controversial reforms in bid to boost its international standing and rescue its ailing economy -- but bringing it into confrontation with those who see changes as anti-Islamic.

The offending picture, in a history text book for teenagers, has become a flashpoint in the argument.

"It is an ugly offence," said Sudan's Academy of Islamic Fiqh, the body ruling on Islamic law, which issued an edict banning teaching from the book.

Michelangelo's fresco, depicting the Biblical story of God reaching out with his hand to give life to Adam, is a flagship piece of 16th century Renaissance art that forms part of the Sistine Chapel's ceiling in Rome.

But Adam is also revered as a prophet in the Koran, and Islamists say the painting goes against teachings prohibiting depictions of the human form in art.

"The book glorifies Western culture in a way that makes it the culture of science and civilisation -- in contrast to its presentation of Islamic civilisation," the Fiqh academy added.

Furious Muslim clerics have railed against the book, and other changes to the school curriculum.

In one video widely shared on social media, a preacher broke down as he waved the book during Friday prayers, accusing it of promoting "apostasy" and "heresy".

Another urged followers to "burn the book".

But others defended the changes, saying they were part of necessary education reforms.

"The picture is not in a religious book," teacher Qamarya Omar told AFP. 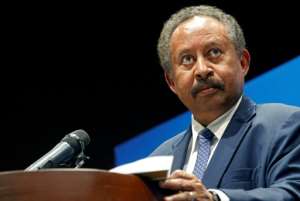 "It is in a history book for the sixth-grade under a section called European Renaissance, which makes it placed in context."

Omar is also a member of the Sudanese Professionals Association -- an umbrella group which spearheaded months-long anti-Bashir protests.

"A picture will not make people shun their religion or shake their belief," said Omar.

"School curricula should be determined by educational experts on a scientific basis," she added.

However, the protests have shaken the authorities.

Then on January 6, Hamdok froze changes to the school curricula and ordered the formation of committee representing all sectors of the society to investigate.

But it sparked anger from reformers, including prompting the resignation of the man who oversaw the changes to the schoolbooks, the head of the National Center for Curriculum and Educational Research (NCCER).

"I find myself unable to proceed with a government brought by a popular revolution but... which surrendered to the pressures of the remnants of the defunct regime," NCCER head Omer al-Qarray wrote in his resignation letter. 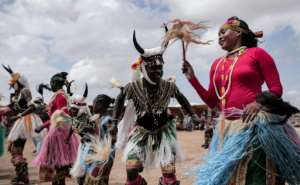 Sudan is a Muslim-majority nation but includes Christians and people following their own indigenous beliefs, including in the homeland of these dancers from the southern Nuba Mountains region, here photographed in August 2019. By Jean Marc MOJON (AFP)

Analysts say it has illustrated the wider divisions left after the decades of Bashir's authoritarian grip on power, after he seized power in a 1989 Islamist-backed coup.

His government imposed a harsh form of Islamic law, criminalising everything from drinking alcohol to women wearing "revealing" clothes.

Sudan is a Muslim-majority nation, but also includes large numbers of Christians as well as indigenous beliefs.

"The dispute over the painting and its inclusion in the history book is a very technical issue, that should only concern educational experts," said Sudanese analyst Othman Mirghani.

"But now it morphed into a societal and a public opinion issue."

He also blamed the transitional government for often "failing to deliver the appropriate political discourse, especially on matters that touched upon sensitive issues."

Earlier this month, Khartoum signed the US-backed "Abraham Accords" paving the way to normalising ties with Israel, less than a month after Washington removed Khartoum from its "state sponsors of terrorism" blacklist.

It also decriminalised conversion from Islam.

Those reforms triggered street protests slamming the decisions as "anti-Islamic."

"Islamists usually play on the religious chord which is a very sensitive subject in the Sudanese society," said Mirghani, who is also editor-in-chief of Al Tayyar daily.

"The transitional government tends to overlook this aspect, and it should be more careful -- because disputes between Islamists and liberals will persist in full force."