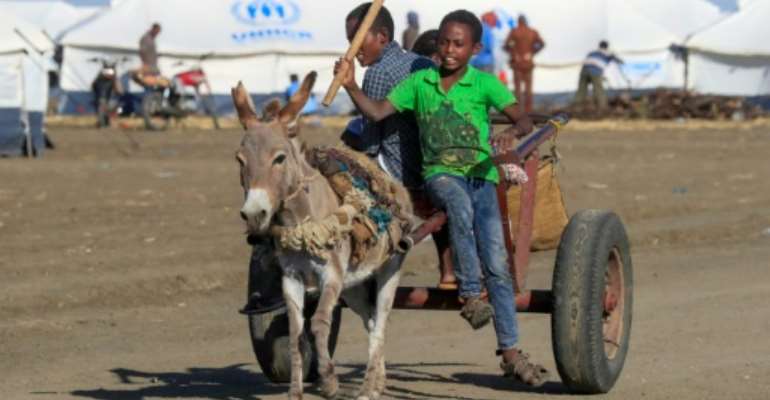 Thousands of Ethiopian refugees have fled the Tigray conflict and reached the Tenedba camp in Mafaza, eastern Sudan. By ASHRAF SHAZLY (AFP)

Filippo Grandi said he was "very worried" for the safety and well-being of Eritrean refugees in two refugee camps in the Tigray region, which United Nations agencies have been unable to access following an Ethiopian military offensive.

"I remain extremely troubled by the humanitarian situation in the Tigray region of Ethiopia and its impact on civilians, in particular Eritrean refugees hosted in the region," the UN Refugee Agency (UNHCR) chief said in a statement.

Before the unrest, some 96,000 Eritrean refugees were sheltering in four camps in Tigray, which have been in place for more than a decade.

Grandi welcomed access being granted to the Mai Aini and Adi Harush camps, with agencies able to distribute food to some 25,000 Eritrean refugees and start work on restoring water and health services.

"However, in spite of repeated requests, UNHCR and partners have not yet had any access to the Shimelba and Hitsats refugee camps since the start of the law and order operation two months ago," he said.

"I am very worried for the safety and well-being of Eritrean refugees in those camps. They have been without any aid for many weeks."

"Furthermore, and of utmost concern, I continue to receive many reliable reports and first-hand accounts of ongoing insecurity and allegations of grave and distressing human rights abuses, including killings, targeted abductions and forced return of refugees to Eritrea," said Grandi.

Last month, the United States deemed the reports of Eritrean troops in Tigray as "credible" and "serious".

But a senior officer in the Ethiopian army, General Belay Seyoum confirmed this month that Eritrean soldiers had entered the area.

Tigray residents have also accused Eritrean troops of abuses and looting in the area.

"Reports of additional military incursions over the last 10 days are consistent with open source satellite imagery showing new fires burning and other fresh signs of destruction at the two camps.

"These are concrete indications of major violations of international law."

Grandi said UNHCR teams on the ground were equally distressed by their inability to assist thousands of Eritrean refugees fleeing the camps in search of safety and support.

"Refugees arriving on foot to Shire town in Tigray are emaciated, begging for aid that is not available," he said, while those that reach the Ethiopian capital Addis Ababa were being returned to Tigray, some against their will.

Grandi reiterated the UN-wide call for full and unimpeded access in Tigray.

"Safe access and swift action are needed now to save thousands of lives at risk," the UN High Commissioner for Refugees added.

Thousands have died in the fighting in Tigray, according to the International Crisis Group, and tens of thousands of refugees have streamed across the border into Sudan.

Abiy declared victory in late November. However, the TPLF has vowed to fight on.