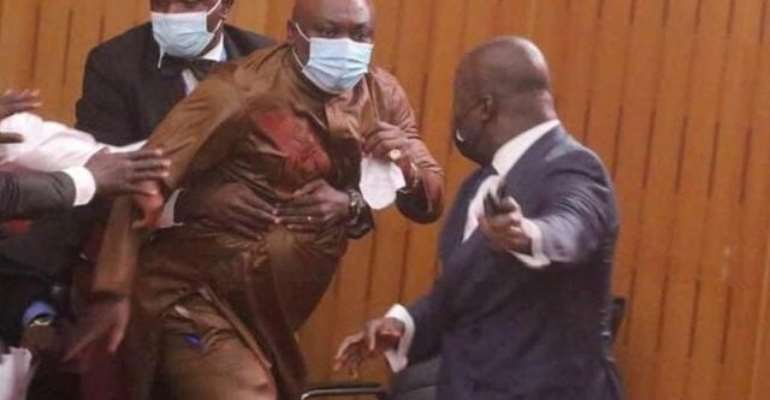 Last week Thursday, January 7, 2021, there was commotion in parliament in an exercise to elect a new Speaker of Parliament to lead the 8th Parliament.

To the shock of Ghanaians and international bodies, MP for Tema West constituency Carlos Kingsley Ahenkorah snatched ballot papers as he disrupted the process.

In a press release from STRANEK-Africa, the group is calling for investigations into the chaos to ensure the MP faces the deserved punishment.

“This act we consider to be very criminal, undemocratic, un-parliamentary, and dishonorable and he must face the full rigours of law. An apology from him is not enough,” part of a press release from the group has said.

Among many bizarre occurrences in the house on the day, the two main political parties clashed over who has the majority with the military at a point forced to go in to restore order.

STRANEK-Africa wants punitive measures to be taken against the embarrassing moments to serve as a deterrence for further reoccurrences.

Below is the press release from STRANEK-Africa:

After every election, we look forward to our President-elect, Speaker of Parliament and two Deputies to be sworn in but this year was something else.

Opposition politicians clashed in Ghana's Parliament prompting military intervention. Could it be that the two major political parties want to show how powerful they are?

Legislators were voting to choose the next Speaker of Parliament and chaos erupted after a lawmaker from the ruling party to seized the ballot papers.

STRANEK-Africa is however appalled by the actions of the Member of Parliament (MP) for Tema West who was beaten for snatching ballot papers on the floor of Parliament.

This act we consider to be very criminal, undemocratic, un-parliamentary and dishonorable and he must face the full rigours of law. An apology from him is not enough.

A 39-year-old fisherman Christian Nukpeta has been sentenced to three months imprisonment for engaging in similar actions in the just-ended general elections at the Sene West constituency in the Bono East Region. Indeed, what is good for the goose must be equally good for the gander.

The second unfortunate happenings was, how armed combatants of the Ghana Armed Forces moved into Parliament. Who instructed for such actions? For what purpose? Why were they armed? This matter begs for answers and a full blown investigation will suffice in that regard.

Ghana undoubtedly has become the bastion and a beacon of democracy across African and the nearing 3 decades of the 4th Republic is a show of much fidelity. Hence, taking punitive measures against the embarrassing moments will serve as a deterrence for further reoccurrences.

We are all involved in building our motherland.