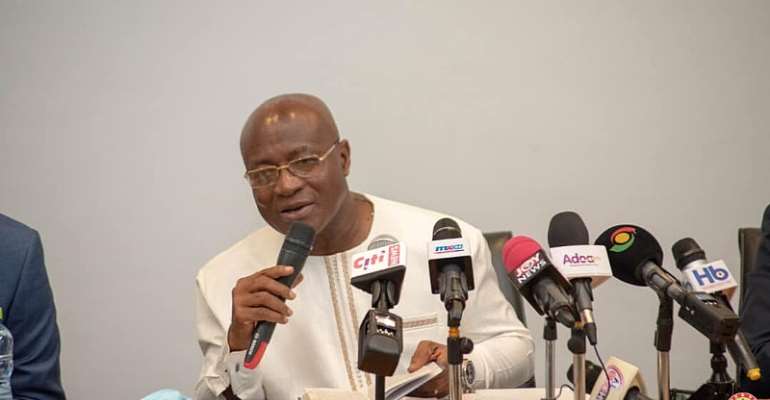 The Leader of the New Patriotic Party (NPP) Caucus in Parliament, Osei Kyei-Mensa-Bonsu has denied allegations that he instructed the Member of Parliament for Tema West to snatch ballot papers during the inauguration of the House.

Mr. Ahenkorah on Thursday, January 7, 2021, snatched uncounted ballot papers and attempted to bolt with them after realizing his side had lost the speakership election.

He was overpowered and accosted at the entrance of the parliamentary chamber and physically challenged by some NDC MPs.

But some have said he was instructed by Osei-Kyei-Bonsu to do so a fter he was seen in a video having a chat with NPP leader prior to the said action.

But Kyei-Mensa-Bonsu while denying the allegation said Mr. Ahenkorah did what he did on his own volition.

“So I don't know why people are still clinging to suspension that I instructed him to do what he did.”

Meanwhile, the leader of the NPP Caucus has said Mr. Ahenkorah had apologized to him for his actions.

“He came to my office on Tuesday to apologize. That was the first time he stepped into my office after these unfortunate events.”

He made this known in an interview with GhOne Television. Carlos Ahenkorah apologizes for his actions

Mr. Ahenkorah in an earlier press statement said he is heartbroken by the turnout of events.

According to him, he did what he did for the love he has for his party (NPP).

“I did it for the grassroots who relied on us in power to survive, the president who needs some peace to run the country and the greater NPP party as a whole because we cannot always allow the NDC to threaten and vilify us. I apologize though to my family and friends both far and near who may be affected by my actions.”

“The NPP in me couldn't be controlled. I apologize but I tried!!!”

He further added that “I must say I am heartbroken and dejected. We've not seen the end of this yet. With this success, they would tell us what they [NDC] want and what they don't want in parliament because the whip system has been compromised. This is so sad. I'll die for my party any day.”