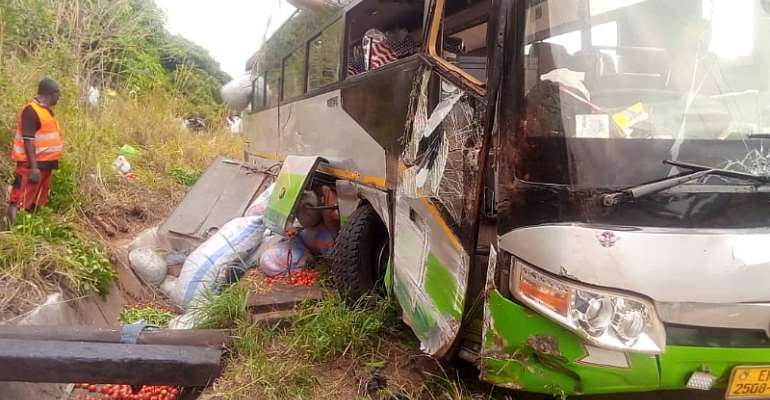 Some youth of Tanoso in the Techiman Municipality have indicated their barring of teeth with careless and stubborn drivers whose reckless attitude claims countless lives in a series of avoidable accidents in the town.

This comes on the back of recent lorry accidents around the Danso market and the Tano bridge within the town, the latest of it being yesterday Yutong STC bus crashing of a 16 yr old pedestrian dead on the spot.

The Yutong bus with registration number, ER 2508-11 from Garu in the Upper East region was heading to Kumasi and nearly collided with a heavy loaded overtaking cargo truck also heading towards the Techiman end just 50 metres away from the Danso market in Tanoso.

The passenger bus driver attempting to swerve the danger of colliding with the wrongfully overtaking vehicle then took to the pedestrian walk lane and subsequently crashed down the 16 yr old Latif Mutala who was sent by his grandmother to buy some food items from town.

Reacting to the incident, the irate youth of Tanoso highlighted the frequency of accident-related deaths lately to Cruz FM political show producer Mr. Nabila Salifu and threatened to start burning cars the next time a resident is knocked down by a car thereby calling on government and highway authorities to swiftly come to their aid with some engineering works on the road to avert future worse occurrence.

At least 4 lives have lost from December 2020 and January 2021 in separate car accidents in Tanoso. Many lives and properties in recent years have been lost owing to several road crashes within the town with many calls by residents to authorities to get the matter solved appears unattended to.

Following Sunday's accident, scores of angry youth took to the main road to register their displeasure at the worrying situation and as a sign to awaken the "heedless authorities" to act. As they pursue the demonstration, a prominent personality, Nana Ogyeabour II Chief of Hansua and Baamuhene of the Techiman Traditional Council appeared on a trip, summoned, and promised taking charge of their request in two weeks. Calm then restored with the kind words from the Hansua chief.