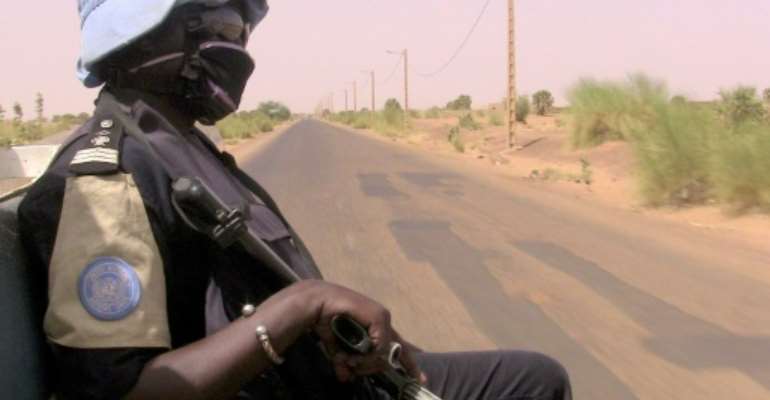 Peacekeepers (similar to this one, pictured May 2016) travelling the road linking the central town of Douentza to the city of Timbuktu further north hit a roadside bomb, according to a statement from the MINUSMA peacekeeping mission. By SOULEYMANE AG ANARA (AFP/File)

Three UN peacekeepers from Ivory Coast were killed in central Mali on Wednesday, the UN said, in the latest violence to hit the war-torn Sahel state.

Peacekeepers travelling the road linking the central town of Douentza to the city of Timbuktu further north hit a roadside bomb, according to a statement from the MINUSMA peacekeeping mission.

Gunmen then opened fire on the convoy, the statement added. Three soldiers died and six more were wounded.

"The robust response of the peacekeepers drove the cowardly assailants to flee," the MINUSMA statement said.

An statement from a UN spokesman in New York earlier on Wednesday said that one peacekeeper was killed and seven wounded.

The attack is the latest in a brutal conflict which has been raging in Mali since 2012, when jihadists overtook a rebellion by mostly ethnic Tuareg separatists in the north.

The conflict, which has killed thousands of soldiers and civilians to date, has since spread to central Mali as well as neighbouring Burkina Faso and Niger, inflaming ethnic tensions along the way.

Laying roadside bombs -- or improvised explosive devices (IED) -- is a favourite tactic among militants in the arid Sahel region.

France -- which has 5,100 troops deployed across Sahel -- has lost five soldiers to IED attacks since late December, for example.

First established in 2013, the 13,000-strong MINUSMA is the deadliest peacekeeping mission in the world. Over 230 of its personnel have died since the mission began.

MINUSMA head Mahamat Saleh Annadif condemned Wednesday's attack on UN peacekeepers, adding in the statement that he "bowed with deep sadness before the memory of the peacekeepers".

"At a time when all efforts are being mobilised to get Mali out of its rut, I deeply deplore the resurgence of these attacks against national and international forces, as well as the civilian population," he added. 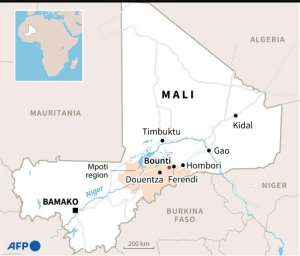 Map of Mali locating the town of Douentza and the city of Timbuktu. By Manel MENGUELTI (AFP/File)

The attack on UN peacekeepers occurred a day after a UN Security Council Meeting devoted to peace efforts in Mali.

In his latest report, UN Secretary-General Antonio Guterres expressed concern about the deteriorating security situation, pointing to the situation in central Mali as particularly worrying.

Mali's interim government is also under pressure to quell the seemingly endless conflict.

Anger about lack of progress against the jihadists and perceived corruption contributed to protests against president Ibrahim Boubacar Keita, which culminated in his military ouster last August.