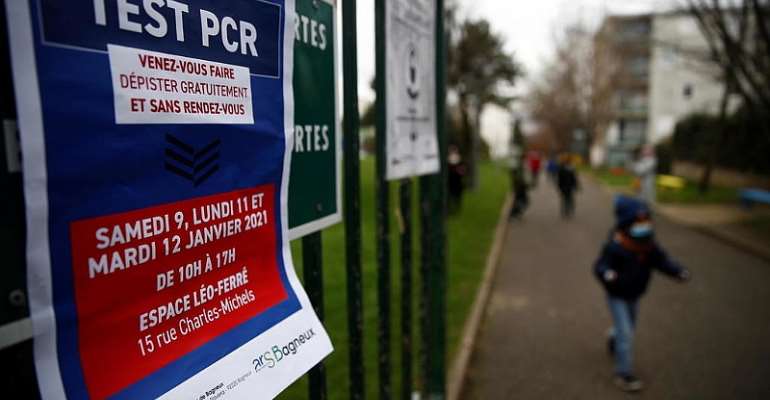 As French officials prepared to meet in the office of President Emmanuel Macron to decide on the latest response to the Covid-19 epidemic, a scientific adviser has said the spread of a more contagious variant of the new coronavirus does not mean schools should be closed, despite closures in neighbouring countries.

Evidence of the spread of the more contagious variant of the virus causing Covid-19, detected in the UK last month, and an overall trend of increasing infections did not appear to be leading the French government to consider imposing a third nationwide lockdown.

Jean-François Delfraissy, who heads the scientific council advising the government on the epidemic, said school closures were unnecessary but new restrictions were needed in the face of the spread of the UK variant of the virus in France.

“We think English data on how the virus is affecting schools are not definitive enough to lead us to recommend the closing of schools in France,” Delfraissy said, though he did recommend closing classes or schools where cases of the variant are identified.

“The immediate challenge is not to eliminate it but to slow its progression by taking a number of restrictive measures,” he said.

“I am very concerned about the English variant. The faster we make decisions, the more effective they will be.”

The most likely option for new restrictions appeared to be advancing a nationwide curfew from 8pm to 6pm, as has already happened in parts of eastern and southern France where case numbers are particularly high.

Delfraissy also described France's situation as being paradoxical and at odds with that of neighbouring countries.

“On the one hand, France appears to be doing better then European countries overall,” he said. “On the other hand, figures have been steady or slightly growing since December, we do not yet know if New Year's celebrations had any impact and we have a relatively high hospital and ICU bed occupancy rate, but one that is not getting out of control.”

The first results of an initial study of the UK variant found it accounted for an estimated 1 percent of about 100,000 recent cases in France, meaning about a thousand cases nationwide.

Against that spread, Delfraissy expressed an optimistic outlook that an acceleration of the vaccine campaign would mean life would be back to normal by September.

“I will wager that there are certainly a number of people who will not wish to have the vaccine, but a large majority of the French population will understand the interest of vaccines and that we can get put a large part of this crisis – but not all of it, since we will continue to wear masks – by September 2021.

“The three months to come will be difficult, but things will be better in springtime and improve by the end of summer.”

Delfraissy also called for university classes to resume in February, citing the psychological toll of the pandemic restrictions on students.

“It's a major public health concern,” the advisor said. “We are asking a lot of this young population of France.”

AFP new agency reported that a student in Lyon was stopped from jumping out a window of a residence on Tuesday evening after neighbours intervened. The student residence board said the reasons for the attempted suicide were unknown and that the student was currently in hospital.

The incident came as after another student was in critical condition in hospital after jumping out of a window of a university residence in Villeurbanne, a suburb of Lyon, several days earlier.

“Like all students, we are socially isolated,” wrote Romain Narbonnet, one of the student's classmates, in a Facebook post shared 24,000 times as of midday on Wednesday.

“For 24 hours a day, seven days a week, we stay in our student bedrooms, which are the size of prison cells, only with Wifi. How much can one student take?”