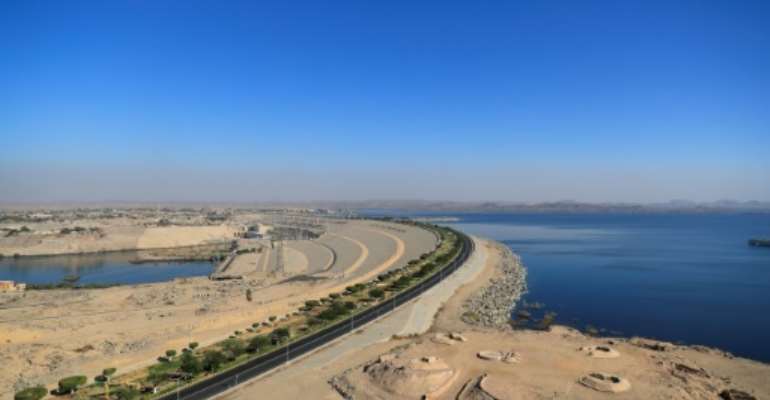 Egypt's Aswan High Dam and Lake Nasser: the building of the dam was spearheaded in the early 1950s by charismatic pan-Arabist president Gamal Abdel Nasser. By Khaled DESOUKI (AFP)

Half a century since Egypt's ground-breaking Aswan dam was inaugurated with much fanfare, harnessing the Nile for hydropower and irrigation, the giant barrier is still criticised for its human and environmental toll.

It is also a stark reminder -- amid high tensions today as Addis Ababa fills its colossal Grand Ethiopian Renaissance Dam (GERD) upstream -- of just how volatile politics over the life-giving, but finite, Nile water resources can be.

Egypt, where the river provides some 97 percent of water for more than 100 million people, is the final section of the Nile's 6,650-kilometre (4,130-mile), 10-nation journey to the Mediterranean.

For millennia, the North African country was at the mercy of the seasonal rise and fall of the river, dependent on the rainfall in nations far upstream. 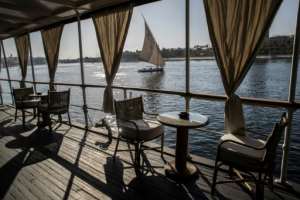 An Egyptian 'felucca' sailing boat on the Nile at Aswan; before the dam was built, Egypt was for millennia at the mercy of the seasonal rise and fall of the river. By Khaled DESOUKI (AFP)

It was a "very important hydro-political act", said geographer and author Habib Ayeb, a Nile expert who has taught at universities in Cairo and Paris.

The dam was inaugurated on January 15, 1971, three months after Nasser's death, by his successor Anwar al-Sadat.

For the first time, "an Egyptian president decided to manage the Nile within Egypt", to develop agriculture and the economy in the country, Ayeb added.

For Egypt, an otherwise desert nation where 97 percent of the population lives along the green and fertile Nile banks, the dam revolutionised its relationship with the land.

"The dam offered a reprieve to Egyptians by giving them enough water... and protecting them from the hazards of floods, which could be absolutely catastrophic," said Ayeb.

It also brought electricity to much of the country, a move Nasser said was key to developing the nation.

Abdel Hakim Hassanein, who overlooks the river from his home close to the dam, some 700 kilometres south of Cairo, praised its construction.

"We didn't have electricity before, we used oil lamps," the 68-year-old said, adding that work at the dem remains a key source of local jobs.

But Egypt, with the Arab world's largest population, sees the GERD as an existential threat.

'Belly of the desert' 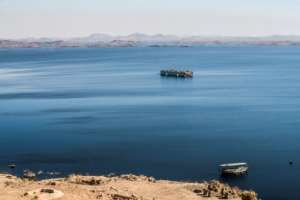 The Aswan dam created the vast Lake Nasser, which flooded the homeland of Egypt's Nubian people, forcing tens of thousands of leave. By Khaled DESOUKI (AFP)

In the 1960s, many Egyptians also saw the Aswan dam as a threat to their lives -- in a different way.

The lake behind the dam flooded the homeland of Egypt's Nubian people, forcing tens of thousands to leave.

"For the Nubians, the High Dam is a symbol of oppression," said rights activist Fawzi Gayer. "It wiped out a civilisation."

Gayer was born just after his family was relocated to a dusty town its Nubian residents call Abu Simbel "Displacement".

"We're talking about a community with a Nilotic identity that breathes the Nile... and we have been thrown into the belly of the desert," said Gayer.

"The elderly died of shock."

The Nubians' long-running demand for a "right of return" was included in the 2014 constitution, but their lands have been swallowed by the 355-kilometre-long Lake Nasser, which stretches south into Sudan.

It was not only people who had to move; the waters threatened to drown the three-millenium-old Pharaonic temples at Abu Simbel, kickstarting a massive UNESCO-led rescue mission that took eight years. 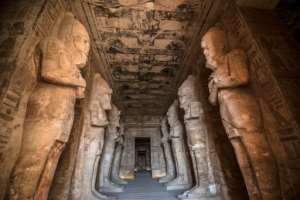 The Ramses II Temple at the archeological site of Abu Simbel in southern Egypt; the three-millenia old temples were moved in a giant rescue mission before they were drowned by rising waters in Lake Nasser. By Khaled DESOUKI (AFP)

The ancient complex, including giant stone carved statues, was dismantled and moved to a new location, in one of the world's biggest archaeological rescue operations.

There were environmental consequences too.

The creation of the giant lake also upset the river's delicate ecosystem, holding back the fertile silt deposits, causing erosion and increasing use of chemical fertilisers.

For Ayeb, the dam also "proved to be a political bomb".

In building Aswan, Egypt and Sudan agreed a Nile water sharing deal, but did not include any other upstream nations, including Ethiopia.

"It created the foundations for the break-up of the Nile basin as a framework for a common good," said Ayeb.

Today, Addis Ababa, Cairo and Khartoum are mired in long-running fractious talks over the filling and operation of the GERD dam. 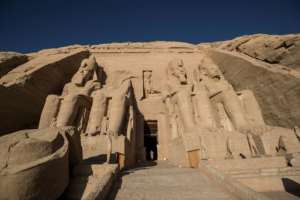 The colossal statues of a seated Ramses II at the entrance of Abu Simbel archaeological site, rescued from the waters of the reservoir behind the Aswan Dam. By Khaled DESOUKI (AFP)

But, according to Ayeb, the critical challenge for Egypt is the management of the water it gets at present.

"Even if Ethiopia stopped its dam, there wouldn't be enough water," he said, arguing Egypt should halt desert irrigation -- where nearly half the water is lost by evaporation -- and stop agricultural exports.

"Egypt must change everything," he said.