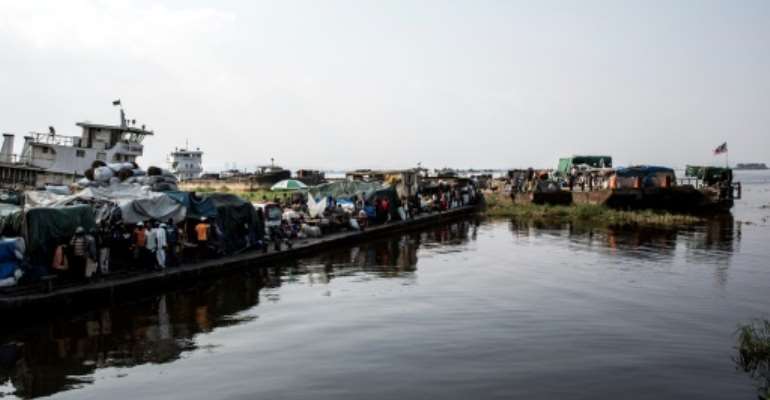 Rivers and waterways are widely used for travel in the Democratic Republic of Congo in the absence of paved roads and railways. By JOHN WESSELS (AFP/File)

Up to 25 people are feared to have died when a barge sank on the Congo River in northeast DR Congo, with survivors gathering on the shore Tuesday to search for missing loved ones with the help of local fishermen.

"A barge which was leaving Kisangani for Basoko sank on Friday evening. The toll today is six bodies which have been recovered, 237 survivors and 19 missing," the vice governor of Tshopo province, Maurice Abibu Sakapela, told AFP.

"The public prosecutor has opened an inquiry. Some people have already been arrested," he said, blaming "overloading and the poor state of the vessel" for the accident.

With tears in her eyes, 27-year-old survivor Ma Mamie desperately scanned the river hoping to spot her missing friend.

"I lost everything, my personal belongings and goods," the trader said, sitting on the river's shore, which was littered with plastic bags and other rubbish.

"The most unbearable thing is not finding my friend, she is like a sister to me."

A woman on the shore whose relative was still missing was trying to instruct the fishermen where to search.

"Dive on the other side instead, you never know, maybe you will find him," she said.

One of the fishermen, Paulin, said they did not know if they would be paid for their work, but added that "we have no choice".

"We are obliged to do it, it's our way of helping these grieving families," he said, his feet in the water.

Bags of cement, boxes of biscuit and drenched bars of soap were scattered on the shore, alongside planks from the damaged barge, parts of which were still visible in the river.

Rivers and waterways are widely used for travel in the Democratic Republic of Congo in the absence of paved roads and railways.

The river is the main way to travel from Tshopo's capital Kisangani to Basoko, with the road between the two so degraded that only motorcycles and bicycles can make the journey.

Shipwrecks are common in DR Congo's many waterways, often with deadly consequences.

Many vessels are old or poorly maintained and skippers may turn a blind eye to rules on lading and safety, despite requirements passed in April 2019 for all passengers to wear life jackets.

In addition, relatively few people in the DRC, a country the size of western continental Europe, learn how to swim.