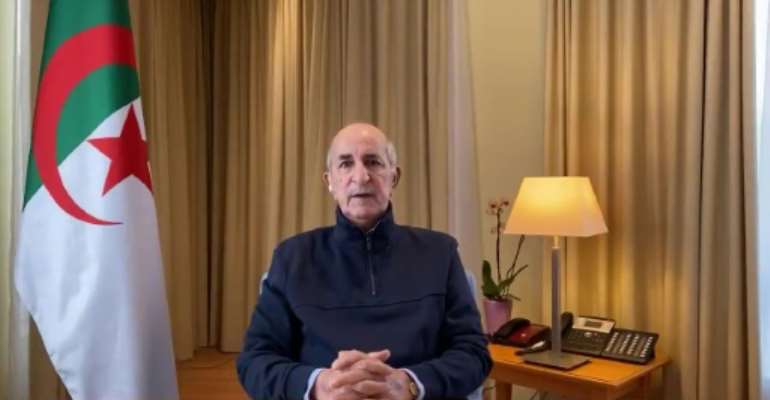 Aged 75 and a heavy smoker, Tebboune was hospitalised in Germany on October 28, and Algerian authorities later announced he had the Covid-19 illness. By - (AFP/File)

Algerian President Abdelmadjid Tebboune returned to Germany for treatment of post-Covid-19 complications in his foot, state television said Sunday, less than two weeks after his return to Algiers following his illness.

State television reported that the treatment was planned before he left Germany in December but was delayed due to "urgent matters" at home and the non-urgent nature of the treatment.

Aged 75 and a heavy smoker, Tebboune was hospitalised in Germany on October 28, and Algerian authorities later announced he had the Covid-19 illness.

He returned to Algeria on December 29 after a two-month absence.

The presidency said at the end of November that he had left hospital, but was remaining in Germany for a period of convalescence.

State television on Sunday broadcast images of Tebboune at the Boufarik military airport near Algiers, where he was seen off by senior officials.

No details were provided on the expected duration of his stay abroad.

On January 1, Tebboune signed a new Algerian constitution into law, after approving a 2021 state budget a day earlier.

Tebboune had been unable to previously sign off on the constitution because he needed to be on Algerian soil to do so.

He had until December 31 to sign off on the budget.