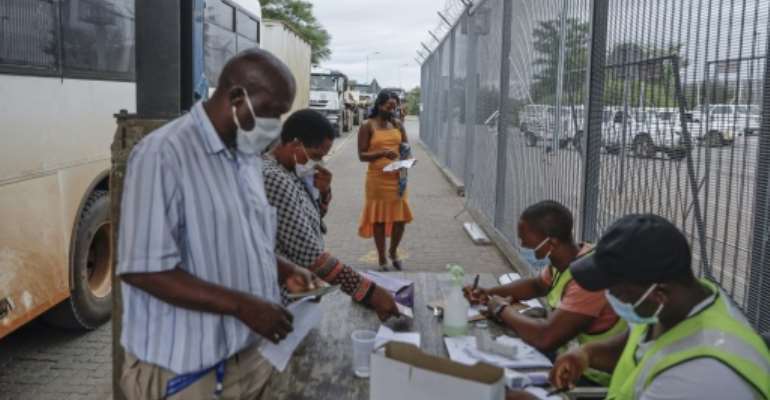 Commuters get COVID-19 test results checked at the South African side of the border -- but a surge in cases is overwhelming authorities on both sides. By Guillem Sartorio (AFP)

The surge overwhelmed immigration authorities at the Beitbridge border post, South Africa's second-busiest entry port, where angry crowds were stranded by the backlog.

"The situation is very, very, very hectic," said Muzondiwa, desperate to get back on the road after officials finally approved his coronavirus test and additional pandemic-related paperwork.

"The line is going very, very slowly and the sun is very hot," he complained.

Flustered travellers hurried past with their luggage, hopping into minivan taxis parked alongside sizzling barbecue stands selling chicken wings on the go.

Coronavirus has complicated cumbersome land border crossings in southern Africa, where trucks can sometimes wait days to get through sluggish customs.

"What causes the delays at the borders are the documents," explained South African driver Sinki Tshangise, 44, who has criss-crossed between Botswana, Malawi, Zambia and Zimbabwe for almost a decade.

Negative Covid-19 certificates often expire before arrival, he added, forcing drivers to pay for more testing on the road.

"I don't think I can afford to pay at each and every border," said Tshangise. "It's a real struggle." 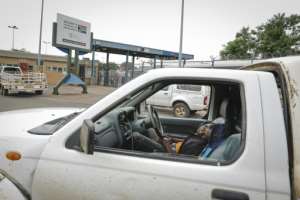 A man looking to cross the border sleeps inside his pick-up truck -- the coronavirus has complicated crossings which can take days. By Guillem Sartorio (AFP)

Health workers said they had struggled to keep up with the influx from Zimbabwe at the start of its second lockdown earlier this week.

Lines of border-crossers spilled over onto the single bridge across the Limpopo River, which naturally divides the two countries.

Travellers and trucks crowded together along the narrow concrete strip with little leeway for social distancing.

Zimbabwe reintroduced movement restrictions to stem a surge in confirmed coronavirus cases, which have more than doubled to over 18,000 since the start of November. 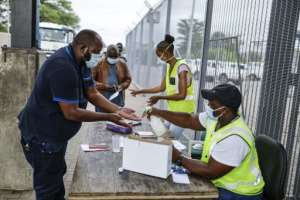 A man gets his hands sanitised before entering South Africa -- but pandemic-related testing and associated paperwork have created a huge backlog. By Guillem Sartorio (AFP)

But nurse Country Musekwa noted that some Zimbabweans caught the virus on their way into South Africa.

"People who said they tested negative that side in Zimbabwe... tested positive because they were on the bridge for more than four days," he told AFP.

South Africa is already grappling with the continent's worst coronavirus outbreak and a spiralling resurge in cases attributed to a new virus strain.

The country has recorded more than 1.17 million infections and 31,800 fatalities, with an unprecedented 20,000-odd cases reported in just 24 hours several times this week.

Provincial authorities on Thursday described this week's backlog at the Beitbridge border as a "potential superspreader" and called on incomers to self-quarantine.

"We cannot monitor everybody," said provincial government spokesman Thilivhali Muavha, noting that authorities could not force travellers into isolation.

"This is now in their hands... you cannot expect people to go to a lodge (hotel) when they have their own house."