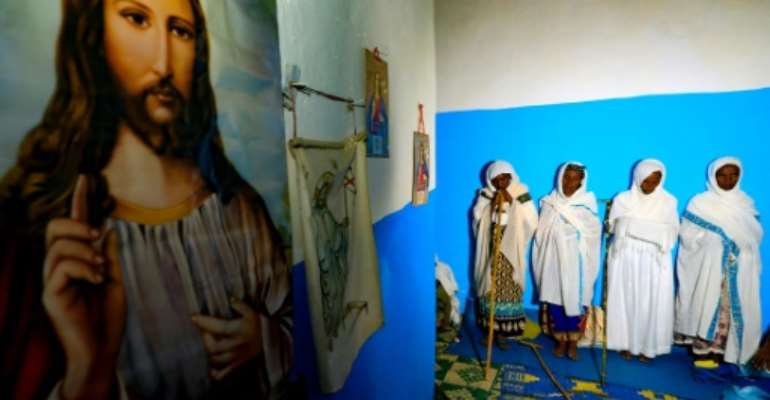 Ethiopian Christians living in a refugee camp in Sudan have marked Coptic Christmas in exile, desperately praying to be reunited with loved ones and return to their conflict-hit home.

Worshippers flocked in and out of the building to attend the prayers, which lasted into the early hours of Thursday morning.

They lit candles, sang solemn hymns and spent hours praying that they would find loved ones who went missing in the conflict that has rocked Ethiopia's northern Tigray region since early November.

"I will be praying for peace in Ethiopia, and to return safely to (my village) to find my family," Benyam Haily told AFP outside the church.

Hailey is among more than 60,000 people forced to flee since the outbreak of the conflict.

He arrived in Um Raquba nearly a month ago with nothing but the clothes he was wearing.

He said this year's Christmas was only a reminder of his missing family.

"I'm grateful that I'm in good health, but I'm here all alone," he said. "There can be no Christmas celebrations without my family and two children."

After the mass, men carried torches and gas lamps as they headed off to break their 45-day fast from meat and milk.

Children gathered to watch as women lit wood fires to cook meat, beans and porridge as well as baking bread under the dim moonlight.

While some had joined forces to buy poultry, lambs or goats, many could not afford them.

"Back home, I had several sheep and was planning to buy new clothes for my children for Christmas like every year," said refugee Abba Soliman who preparing a meal of lentils for her four children.

She had hoped to be back home before the festivities and be reunited with her missing daughter.

"I will not celebrate without finding her," she said.

After weeks of fighting, the Ethiopian premier, who won the 2019 Nobel Peace Prize, claimed victory after his forces captured Tigray's capital Mekele.

The UN says the clashes have since persisted.

By dawn on Thursday, the meals were ready and refugees gathered around to share the food.

Many, like Clay Hans, had been restless for days as they struggled to collect money for food.

"We were dispersed by the war but we were brought together," said Hans, who joined forces with 14 others to buy sheep.

But, he said, "I will not rest until the war is over."