By Añulika Agina - The Conversation 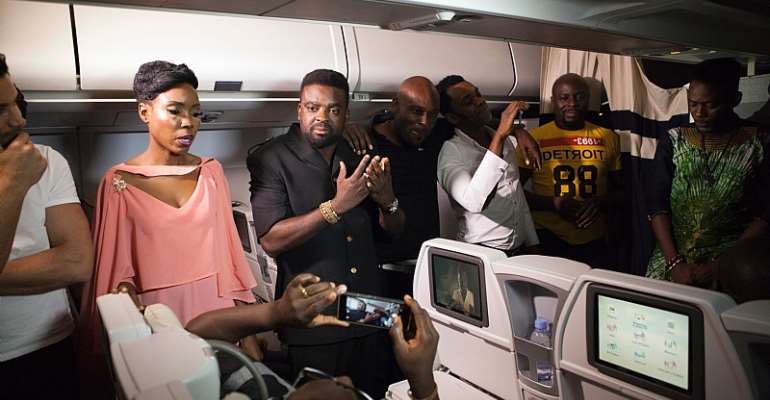 Nigerian director Kunle Afolayan speaks with passengers aboard a flight during the premiere of his film, The CEO. - Source: Florian Placheur/AFP/Getty

Going to the movies is a favourite hobby of many young people in Lagos, Nigeria's most populous city. As the centre of the country's media and art industry, Lagos vibrates with culture and entertainment. It is home to a massive creative ecosystem including film production and exhibition, theatre, music, photography, fashion, hospitality and festive events.

Lagos is also the capital of Nollywood , Nigeria's prolific movie industry. It's the seat of Nigeria's cinema culture, boasting the highest number of movie theatres and distribution companies in the country. The leading Nigerian cinema chain, Filmhouse Cinemas, has 12 cinemas. Lagos alone accounts for six , while other cities have one each.

There is limited research into the makeup of African cinema audiences. The existing information tend to be anecdotal evidence of censorship and social media commentary. Cinema audiences carry important data. Who are they and how do their demographic details influence their interpretation of the films?

To understand more, I conducted a study of cinema-goers in Lagos, based on demographics and habits. The dominant group were young, educated women who visit the cinemas as part of a social and networking experience. They also view the practice as aspirational.

The cinema-going audience and why they go

Audience studies are crucial to the cinema business. Filmmakers gain insights into what movies to produce, cinema operators learn more about their income sources. Companies also learn the optimum number of screenings to hold, how long to keep a film in the cinema, and other valuable data.

With the help of assistants, I interviewed cinema-goers across 3 movie theatres in Lagos, on the opening weekend of a popular Nollywood film–Kunle Afolayan's CEO . I analysed the data using demographics and their corresponding habits to understand movie watchers' behaviour.

Young people aged 26-35 made up the dominant cinema audience in Lagos. This group was mostly made up of college-educated women, who attended their neighbourhood cinemas on weekends, in the company of friends and dates. Cinemas were packed on evenings, starting heavy on Fridays and thinning out by late Sunday. Nigerian director Kunle Afolayan and actor Wale Ojo pose for pictures at the premiere of a film. Florian Plaucheur/AFP/ Getty Images

Since 2004, Hollywood movies have dominated Nigerian cinemas and attracted the most audience. But that trend is rapidly changing with the emergence of high quality Nigerian films. Cinema-goers showed more enthusiasm for local movies made by prominent filmmakers and featured celebrity actors.

Audiences were also attracted by huge marketing and publicity efforts. Movie lovers crowded venues to see trailers, with the hope of meeting the filmmaker and actors in person. Many were willing to pay higher ticket prices for the experience.

Cinema-goers in Lagos were interested in the technical and aesthetic values of the production, and the quality of the acting. While they were largely drawn to romantic comedies, they sometimes enjoyed thrillers with strong narratives.

For many, cinema-going is a social process, which begins with one's companion and continues with other viewers at the venue. Activities such as sharing expectations while in the queue at the box office, searching for online information about the film and deciding refreshment choices are all part of the cinema experience.

Many cinema-goers spend considerable time with their partners, including post-movie window-shopping at the mall. Audiences aren't only focused on the movies. Other attractions include the entire experience of leaving their homes, being immersed in a modern, air-conditioned shopping mall, taking in the sights, sounds and smells from the shops in the building, seeing a mix of female and male fashion trends, running into acquaintances, seeing and being seen by people they aspire to be like, all without hurry.

At the mall, people took selfies and shared them on social media for their friends' network. It was an announcement of how they wanted to be seen, their personal styling, where they had been, what they could afford and the relationships they were in. It provided the space for intimate conversations as well as other subjects of interest, not least the film of the day.

Cinema audience research provides independent data that is not influenced by external sources. Cinema operators and other industry players collect their own data. But their efforts are often guided by economic and political interests.

Independent studies are crucial to understanding this aspect of cultural production and circulation. The competition among cinema owners, and the government's quest for taxes could affect the credibility of data generated by cinema chains.

With the loss of revenue to cinema chains due to the pandemic, this type of research is bound to be digital. As Showmax, Netflix, iROKOtv and other video-on-demand platforms vie for online viewers, it remains to be seen if cinemas will return to pre-COVID positions. But the research has to continue wherever film audiences convene.

Añulika Agina does not work for, consult, own shares in or receive funding from any company or organisation that would benefit from this article, and has disclosed no relevant affiliations beyond their academic appointment.