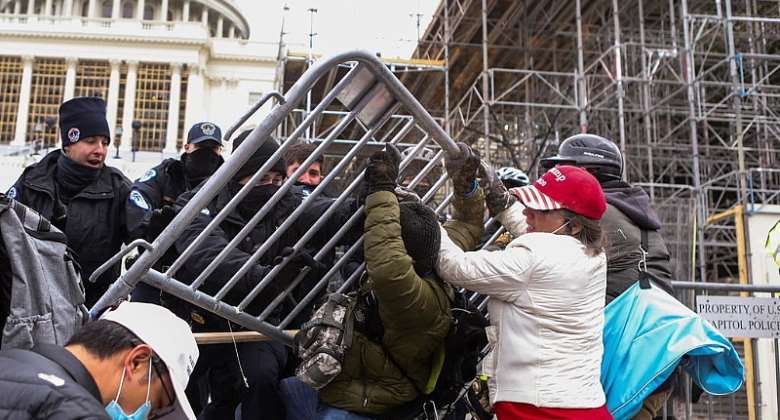 The three hours of mayhem in Washington DC on Wednesday, when a pro-Trump mob stormed the seat of US government at the Capitol, resulted in fierce Chinese criticism of the US democratic system. But the episode also caused unease for activists in Hong Kong, who themselves violently occupied that territory's legislative building last year.

“Even though the US has presented itself as a beacon of democracy,” writes Zhang Tengjun, an assistant research fellow at the China Institute of International Studies in the hardline daily newspaper the Global Times, “it has never been a paradigm of global democracy.”

Now, the failure of US democracy is there for the whole world to see, and this, Zhang contends, is only the beginning. “It could be followed by a large-scale riot. Law and order in Washington will be gravely disrupted,” he says.

The Communist Party paper then goes into a no holds barred barrage of criticism and mockery. “Chinese observers said this is a 'Waterloo to US international image,' and the US “has totally lost legitimacy and qualification to interfere in other countries' domestic affairs with the excuse of 'democracy' in the future,” according to an unsigned piece in the diplomacy section.

“Words like 'karma,' 'retribution' and 'deserving' were frequently mentioned in Chinese netizens' comments when they saw the latest episode of the real-life version of The House of Cards - with Trump supporters storming the Capitol, messing up House of Representatives Speaker Nancy Pelosi's office, clashing with police officers and looting items,” crows the paper.

The link with months of violent demostrations in Hong Kong in 2019 is quickly made.

According to the Global Times, the chaos on Capitol Hill “reminded many Chinese people of the 2019 Hong Kong turmoil which turned violent after anti-government rioters stormed the city's Legislative Council (LegCo) on 1 July, 2019.”

But instead of criticizing them, “US politicians hailed the 'courage' of these mobs, Western media praised the 'restraint' of the rioters.

“Seeing such scenarios, many Chinese will naturally recall that Nancy Pelosi once praised the violence of Hong Kong protesters as 'a beautiful sight to behold',” argues the paper's Editor-in-Chief, Hu Xijin.

The Global Times does not mention the fact that Pelosi uttered these words on 19 June, more than a week before protesters occupied Hong Kong's Legislative Council building, after which the movement turned violent.

But Beijing bears a much older grudge against Pelosi, and the chaos on the Hill offers an opportunity to finally settle accounts.

In 1991, just two years after the Tian'anmen Square massacre, Pelosi travelled to Beijing in a delegation with two other lawmakers, and went to the square where she unfurled a pro-democracy banner, commemorating those who died in June, 1989. She was then briefly detained for questioning by the Chinese police before she was allowed to leave the country.

Since Tiananmen, Pelosi has become one of the most vocal critics of China's human rights situation, supporting US legislation that sanctioned Beijing over its treatment of Hong Kong. “People should ask her not to be dumb, and let her describe how beautiful the chaos on Capitol Hill is,” asks Hu. “I will spare readers a summary of her stances.”

The US Capitol situation puts Hong Kong protesters in an awkward position. For months last year, together with some opposition lawmakers, they engaged in increasingly violent actions, disrupting traffic, damaging public property and bringing the city to a virtual standstill. As a result, Beijing imposed the draconian National Security Law on 1 July 2020, and started rounding up protesters, opposition figures and others who are critical of China.

“There are some superficial similarities to the storming of LegCo in Hong Kong two years ago and what is happening in Washington today,” tweets Hong Kong based reporter Austin Ramsay, “but there is a big difference. One group was demanding the full vote, the other is trying to overturn the result of one.”

But Beijing isn't interested in such subtleties and the chaos in the US capital is just further proof that democracy is a faulty concept.

“The last-ditch madness of the Trump administration will further tear apart US politics,” says Zhang Tengjun. “There is no doubt that the US system is degrading and showing signs of worsening like a cancer,” writes Hu Xijin, the Editor in Chief of the Global Times. But it won't change much, they think.

“Even if US politics is suffering chaos, it won't give up interference in international affairs and other countries' politics. This is the nature of US hegemony,” writes Hu.