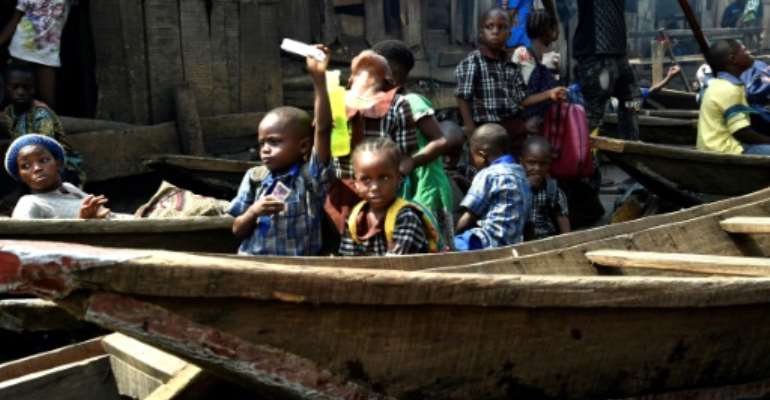 Reeling from the coronavirus pandemic, seven million more people in Nigeria are estimated to fall into poverty this year. By PIUS UTOMI EKPEI (AFP)

Shopkeeper Toyin Jacob never thought she would have to rely on handouts.

Before 2020, food and cash distributions were for her neighbours in Makoko, a coastal community in Nigeria's economic hub Lagos.

Thousands of families live in the floating slum, often in tightly packed huts with no running water or electricity.

Until recently, 60-year-old Jacob was better off, living in a concrete house connected to the grid, on a busy asphalted road. Her daughter went to university and her son had a job.

But everything fell apart last year after her husband died, the "arrival of the coronavirus" pandemic and the economic crisis that followed.

Jacob's small business had been just enough to get by, but could not withstand the five-week lockdown imposed at the end of March.

"With Covid-19 I couldn't continue the business," she said.

"There is no money to buy new provisions," added Jacob, who has started selling household items to survive.

In a matter of weeks she became like many of her neighbours in Makoko, a person categorised by aid agencies as "extremely poor", who depends largely on assistance.

"After the lockdown, until now, I'm not doing anything", Jacob said.

Before the pandemic, nearly half of Nigeria's 200 million people were living on less than $1.90 a day, rivalling India for the world's highest number of poor.

Seven million more people are estimated to become poor in the West African nation this year, according to the World Bank, which added they will be "more urban" and "more educated".

Extreme poverty is rampant in the country's rural areas, but the lockdown has also affected city dwellers, the World Food Programme (WFP) said. 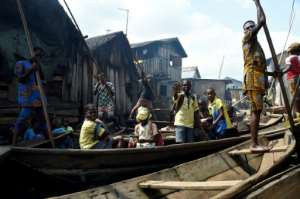 Many in Lagos' coastal community of Makoko were living poverty before the pandemic started. By PIUS UTOMI EKPEI (AFP)

The economic situation became so dire it prompted WFP, which usually concentrates relief efforts in the country's conflict-hit northeast, to start delivering aid along with the government to the largest hubs of Lagos, Abuja and Kano.

"We want to make sure the most vulnerable people have something to cushion the blow of Covid-19, and support them, so they'll be able to get out and look for money, knowing they have food at home", WFP spokeswoman Chi Lael said.

In the narrow waterways near Jacob's home, residents were barely surviving before the pandemic struck.

'Survive by the grace of god'

On a baking hot afternoon, Bidemi Aye sat in front of her house, a doorless bamboo construction elevated on stilts, with her three-year-old in her lap. 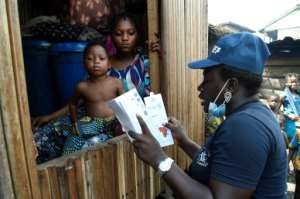 It was 1 pm and neither had eaten anything yet.

With the little her husband, a fish seller, brings home, the family can normally only afford to eat one meal a day.

"With the coronavirus, it's worse," Aye said. "We only survive by the grace of god".

The food distribution represents just a drop in the ocean, especially in Lagos, a megacity of 20 million people where most depend on a daily wage.

In 2016, the oil-dependent country had been starting to recover from the price of crude collapsing.

But the pandemic and a second fall in oil prices saw Nigeria enter its second recession in four years.

Youth unemployment in Africa's most populous country had reached 40 percent even before Covid-19 emerged.

Inflation is now threatening to tip people even further into poverty. The price of millet -- a staple food -- has doubled over the past year, according to the WFP.

Across Makoko, phone numbers are scribbled on the walls.