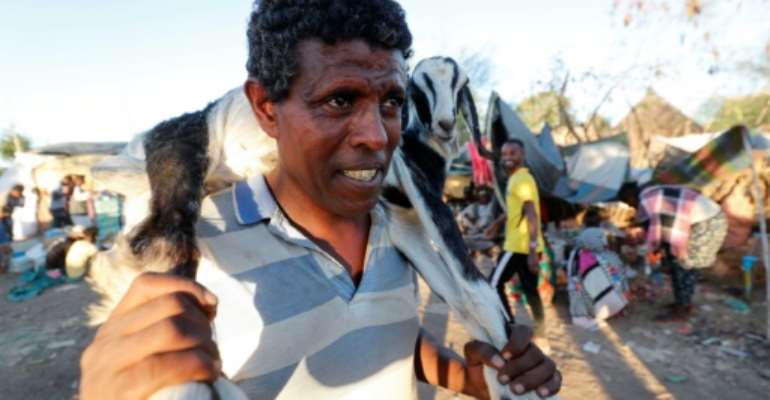 Times are hard for Ethiopian refugees who fled to neigbouring Sudan, but on Wednesday those who could bought a goat or sheep for their Orthodox Christmas celebrations. By ASHRAF SHAZLY (AFP)

For the tens of thousands of Ethiopians who have fled fighting in their homeland of Tigray to neighbouring Sudan, this year's Coptic Christmas on January 7 is a sombre celebration.

There will be little feasting for those living hand-to-mouth in the crowded Um Raquba refugee camp, packed with some of the nearly 60,000 Ethiopians who have crossed into eastern Sudan since November seeking safety.

On Wednesday afternoon -- Christmas Eve for Ethiopian Orthodox Christians -- prices of basic goods soared in the dusty marketplace near the camp as people scrambled to buy food to celebrate.

"Everything is very expensive here," said Haftoun Gebremikail, shopping at the market for something to mark the holiday.

"I just want to buy some lamb, sugar and milk -- or anything! It's Christmas."

But many struggle to find anything within their budget. 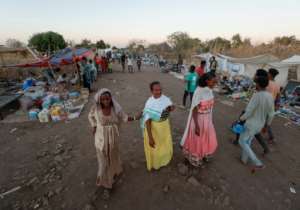 Ahead of Christmas, food prices soared in the Um Raquba refugee camp, packed with some of the nearly 60,000 Ethiopians who have crossed into Sudan. By ASHRAF SHAZLY (AFP)

Demand is high. The sprawling camp is already close to capacity, while the United Nations this week opened a new camp to cope with arrivals.

Refugees are continuing to flee the unrest in Ethiopia's Tigray region, with 800 people having crossed the border into Sudan since the New Year, according to the UN.

Many of the refugees fled with only the clothes they were wearing, forced from their homes as fighting raged nearby. 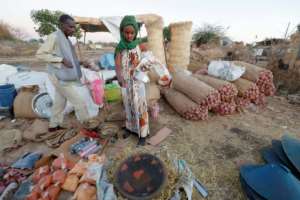 Christmas is a key religious festival for many Ethiopians, and refugees in Sudan on Wednesday bought up supplies to mark the holiday. By ASHRAF SHAZLY (AFP)

Elsa, an Ethiopian lady who gave only her first name, was haggling at the market to buy a plate and a spoon.

Like Gebremikail, she had become separated from her family in the chaos of escaping from Tigray.

"I am here by myself while my family is in Tigray. I don't even know if they are still alive," she said.

"I just want to try to buy whatever I can with the little money I have."

However, the TPLF has vowed to fight on and the UN says clashes persist. 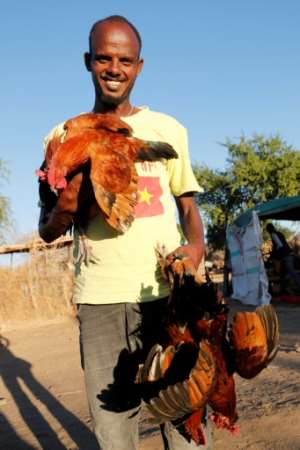 For some Ethiopian refugees in Sudan, the cost of a whole goat was too much, so some clubbed together to buy a chicken. By ASHRAF SHAZLY (AFP)

Sudan, mired in economic crisis with galloping inflation and an acute hard currency shortage, is struggling to cope with the mass influx of people needing aid.

The refugee crisis also came as Sudan struggles with a rocky transition in the wake of the army toppling veteran president Omar al-Bashir in April 2019 amid months of mass protests against his rule.

The UN and aid groups are helping many of the refugees, but the needs still far outstretch what they can offer.

Sudanese trader Mahmoud Abdelrahman said that "demand has grown due to the celebrations", but the refugees are doing what they can to mark the feast day.

For those with savings in their pocket, some were able to buy a goat and or sheep, draping them around their shoulders to carry them back to their tent.

They will be cooked after evening mass held in makeshift churches to mark the arrival of Christmas.

Among those who can't afford to buy on their own, some have clubbed together.

"The prices are too high," said Tesfay Macho, who fled Ethiopia nearly two months ago, eyeing the fat goats out of his price range.

Instead, he and six friends have pooled their money, getting just enough to buy a chicken together.

For these stranded Ethiopians, whose ancestors were some of the very first converts to Christianity in the fourth century, people follow their ancient traditions as they can.

For some, such as Elsa, the significance of Christmas in a time of crisis is about more than what food is in the pot.

"At least we have some shelter here," she said. "And we live in peace."