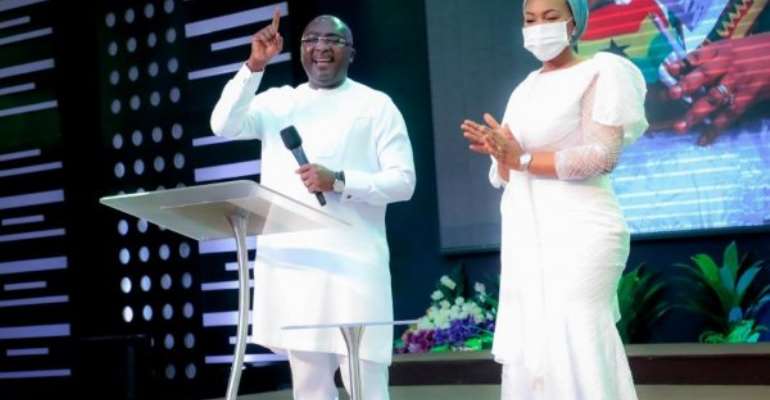 Vice President Dr Mahamudu Bawumia says the ruling NPP and the then Presidential candidate Nana Akufo-Addo conceded defeat in the 2008 General Election for the sake of the sanctity of the country's democracy and for peace to prevail.

He noted that the NPP lost the 2008 presidential election by just 40,000 votes to the NDC, but they accepted the results and sovereign will of Ghanaians.

"It is not easy to lose an election. President Akufo-Addo and I have lost elections before and it was a painful moments.

"We lost in 2008 by just 40,000 votes but we prioritised the peace and sanctity of our democracy and conceded," the Vice President stated.

Vice President Bawumia made the remarks when he, and his wife, Samira worshipped with Victory Bible Church International, Dominion Sanctuary, Awoshie, in Accra, on Christmas Church Service, on Friday.

"I'm much convinced that the Lord that granted us the will and power to prioritize national cohesion, peace and tranquility over personal gratification is capable to do same for us," Dr Bawumia said.

He noted that elections would always come with winners and losers but it was imperative to respect the peace and sanctity of the electoral processes.

The Vice President said it was necessary for every Ghanaian to prioritize the country's peace above personal gratification.

"We should avail ourselves to be used by God as the instrument of peace. As a country, we have come a long way as we have had peaceful coexistence among ourselves despite the diversity of tribes, religion, ethnicity and so on.

Even in our diversity, we have always remain indivisible and what we have in common are in excess than what divide us," Dr Bawumia pointed out.

The Vice President further explained that it was the love for each other underpinned by biblical love for our neighbours, which had made Ghana the most peaceful nation in the West African subregion.

"It is a feat we well deserve and accomplished, and should not be taken for granted because it is by the grace of God that we have peace in our country," Dr Bawumia added.

Dr Bawumia lauded the Presiding Bishop of Victory Bible Church, Bishop Nii Apiakai Tackie-Yarboi for availing himself to be used by God for his purpose and saving many souls.

The Vice President was of the belief that the prayers of Bishop Tackie-Yarboi would go a long way in ensuring peace and tranquility in the country.

"This is the first church service am attending after the 2020 election and it is not a coincidence that we are worshipping in the Victory Bible Church, it is victory for the Lord and Ghana.

"Thank you Bishop and the congregation for the warm reception accorded us, and I will come back to this church to worship with you," Dr Bawumia assured.