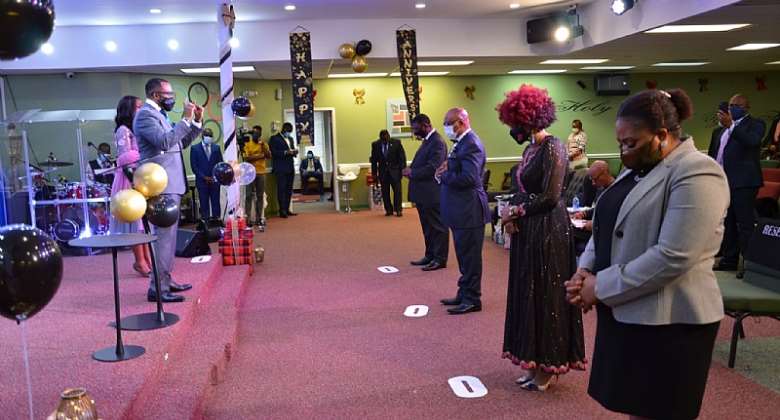 Winners Church, a Virginia based mega church crowned their 10th anniversary celebration with a musical program, a thanksgiving and induction service.

On Saturday December 19th Winners Church launched its 10 year anniversary celebration with a live and virtual musical praise night at the Church’s Dumfries, Virginia auditorium. Many members of the church and the community gathered to celebrate the huge milestone.

The climax of the celebration was a thanksgiving service on Sunday December 20th. Pastor Henry Godwin the Senior Pastor of the Church expressed his profound appreciation to his wife, the leadership of the Church and the entire congregation for the support they have given him to enable the Church to thrive despite all challenges. The Host Pastor also testified that the Church has been sustained financially throughout its 10 year span without any external financial support.

The Genesis Awards being plaques with citations of appreciation were presented to certain personalities who have served faithfully in various capacities in the church since its inception.

Minister Abbey Cheche swept the entire congregation to their feet with musical tunes from his saxophone. He electrified the service with high praise and worship songs with Nigerian talking drums blurting in the background. That musical interlude prepared the ground for an inspirational message by the guest speaker Pastor James Sturdivant.

In his brief message Pastor Sturdivant admonished the Church by reading from Exodus 17:8-17. He said “Before you win you travail through confrontations as such your beginning cannot dictate how your story ends. Winning is how your story ends. He went on “We are more than conquerors, it does not mean you have to fight but must have shown up and be confronted. Put on the whole armor of God and stand to get what you stood for.’

He concluded his message with some powerful demonstration of the strategic direction. He said “ You have to note the strategy of the shepherd” and also called for the support of the congregation for the Pastor.

At the end of his sermon Pastor James Sturdivant long time mentor to Pastor Henry and Mrs. Floral Godwin ordained Pastor Henry as a Pastor called to the service of God, and then laid his hands on both of them and prayed for them. With the growth of the Church it has become necessary to elevate leaders to support the pastor as such Pastor Henry Godwin called and elevated the following members in the ministry. Zenny Oluwo, Kola Fagbenro and Margaret Emuh were ordained as Associate pastors. Elvis Odika was elevated as a Deacon with Daniel Mukete and Jacques Lengo being called to office as elders . Adeola Tella and Jane Fon Nongni were called into service as ministers in training.

The primary goal of Winners Church, Virginia is to develop men and women who are on fire for God. Pastor and First Lady Godwin place the spiritual growth and maturity at the forefront of the ministry.