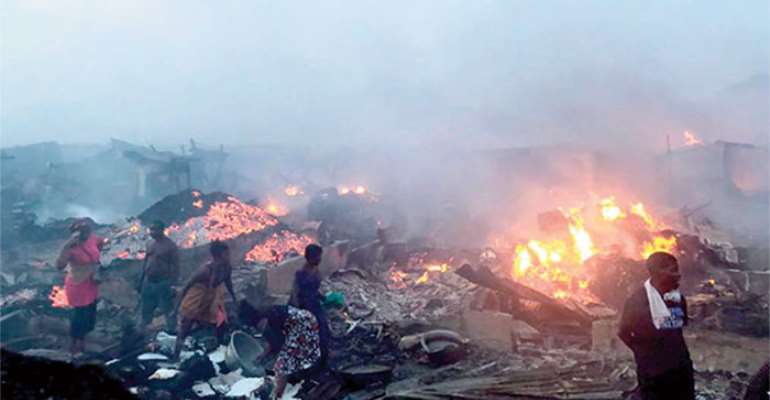 Now the conversation about the NDC's overt and covert missions on markets and other diabolical actions in the aftermath of the December 7 polls which it lost has made a windfall.

The stark correlation between the riotous demonstrations of the opposition grouping and the burning of markets and tyres in some parts of the country which is the windfall has provided us with a wonderful impetus.

Investigations into the political grouping's implication in the diabolical machinations considering its touted violence pedigree would, we have no doubt, make more discoveries as the days elapse.

With the arrest of a suspect in the Kantamanto Market fire and others now on the run, and the complex agenda of burning other facilities in the country including fuel stations, we would have a clearer perspective about what we are dealing with as a nation.

We are confronted with a wounded political party which is ready to do anything as a form of revenge for losing an election.

It is unfathomable why the defeat of a political grouping in an election touted as the most transparent in the country's post-independence history should lead to the imbecile and riotous conduct it is exhibiting across the country.

For how long shall we tolerate this bunkum even as the former President pretends not to know what is happening?

A nasty and sorry story from Kumasi has made the headline in today's edition and we shudder to think that 'so-called' political elites can plan and execute a series of actions in breach of the public order law after signing a pact of non-violence before the polls.

Market women and their male counterparts in markets recently torched by political arsonists did not expect what has befallen them close to Xmas.

The deceit of the NDC is as palpable as it can be. When the leadership of the party led by the former President crisscrossed the country seeking votes, it presented a picture of a group of good people who cared for its compatriots.

Now that the cat is out of the bag and the jigsaw puzzle is taking shape the former President is on the verge of losing all that is left of his integrity if he has not done so already.

He has lost all that he garnered during his public service by allowing the implementation of the dastardly overt and covert operations of his defeated party.

Ghanaians are by these developments and subsequent revelations to be seen understanding better which political groupings to tolerate on the Ghanaian space.

Although they are deflated now and could shelve the destructive burning projects temporarily, let us not stand down our guard.

Market women should supplement the security being provided by the state agencies at the various markets across the country especially Accra and Kumasi.

The shopping areas in the run-up to the pending festivities should be secured because the NDC can implement the covert operations differently from what we expect.

Now that we know the fires are nothing but the handiwork of a disgruntled bunch of politicians acting on the direction of its leaders, we too should be more security conscious.

It is a shame that some compatriots of ours would tread on such a path of destruction.

When we see them burning tyres during their so-called demonstrations, they are only rehearsing for the next market burning mission. What a political grouping!