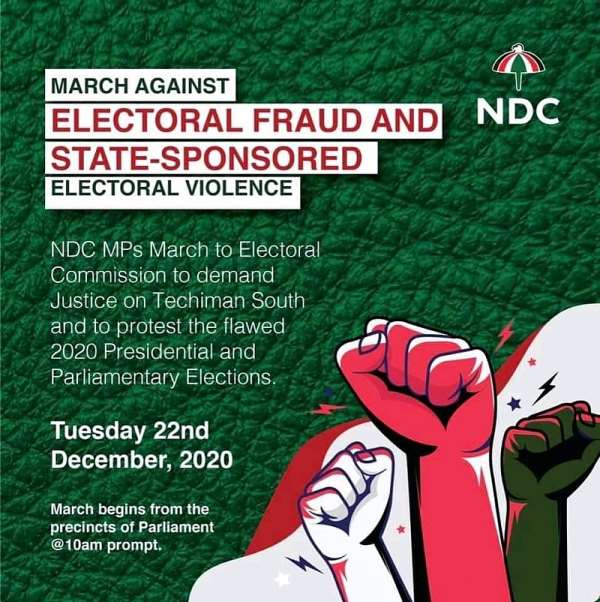 The Minority in Parliament is marching to the Electoral Commission (EC) headquarters this morning to protest the results of the 2020 Presidential and Parliamentary polls.

The march comes on the back of the continuous street protests by supporters of the party following the declaration of results by the chairperson of the Electoral Commission Jean Mensa.

The NDC and its flagbearer John Mahama have described the results which gave President Akufo-Addo 51% of the votes as ‘flawed’.

Meanwhile, a member of the Electoral Commission’s Eminent Advisory Committee Reverend Emmanuel Asante says the opposition NDC has the right to stage their protests over the results of the 2020 polls.

He however added, the demonstration, should not lead to the destruction of state properties and violation of the public order act.

He also reiterated his earlier call for the party to also consider a legal redress over their concerns.

“I have said that once the EC comes out with the results and declare, the law permits members who are affected by the declaration to challenge through legal means. As far as I’m concerned, it’s the right of the aggrieved to seek legal redress and I have no objection to that. Results have been declared and gazetted so the only way is for them (NDC) to go to court and seek redress if they have evidence both in parliamentary and presidential”.

The Electoral Commission has however announced it will break for the Christmas festivities on Wednesday, December 23, 2020.