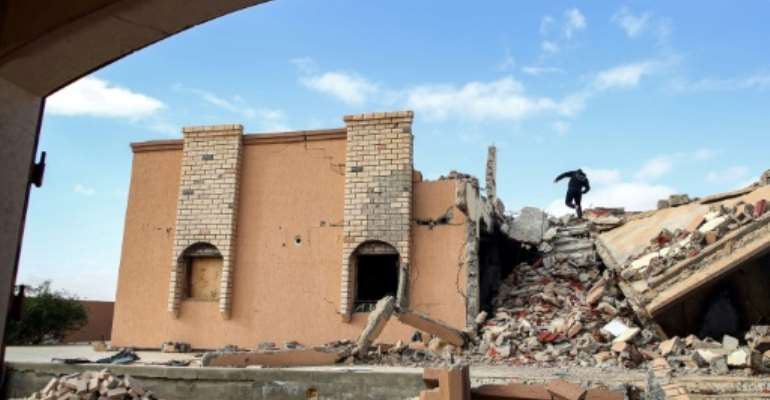 At the end of the 2011 NATO-backed uprising that ousted and killed Libyan dictator Moamer Kadhafi, the town of Tawergha endured brutal reprisal attacks by fighters who accused the population of having backed the strongman. By Mahmud TURKIA (AFP)

When Libyan dictator Moamer Kadhafi was toppled, people took revenge on those they saw as his supporters -- including the entire town of Tawergha, whose 40,000 residents were forced to flee.

Now, almost a decade after militia forces rampaged through the town, torching homes, destroying buildings and leaving farms in ruins, the people of Tawergha are coming home.

Around a third of the original population of the town have returned -- among them is Abdelghani Omar, who has opened a barber shop.

"At first it was tough," Omar said. "My relatives convinced me to get into hairdressing."

People are trickling back to Tawergha after years living in makeshift tent camps, to try to turn the page on a brutal chapter of their lives.

Omar's family persuaded him he was doing the right thing and providing a "useful" service for the battered community. 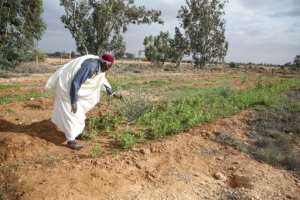 Mahmud Abu al-Habel, 70, tends to his field in Tawergha following his return years after being forced out of the town in what Human Rights Watch called "collective" punishment and a "possible crime against humanity". By Mahmud TURKIA (AFP)

Tawergha, about 200 kilometres (125 miles) east of the capital Tripoli, is close to the port city of Misrata.

At the end of the 2011 NATO-backed uprising that ousted and killed Kadhafi, Tawergha endured brutal reprisal attacks by fighters from Misrata.

Militias from Misrata were key in defeating Kadhafi, and seeing Tawergha as the enemy, they laid siege to the town, pounding it with artillery.

Most of the town's population was violently displaced, according to Human Rights Watch, which denounced what it called "collective punishment" and a "possible crime against humanity".

The people were banished, living in grim destitution in basic shelters on a windswept desert plain.

But after a reconciliation deal -- backed by the UN-recognised Government of National Accord (GNA) -- was signed between the former bitter enemies in 2018, people slowly began to go back to the town.

Their return has not been easy. 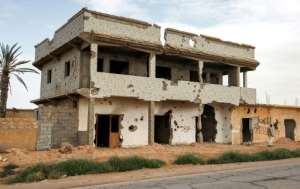 Residents began to trickle back into devastated Tawergha after a reconciliation deal was signed in 2018 between elders from the town and from Misrata. By Mahmud TURKIA (AFP)

"Many would like to return, but they hesitate," said Omar, 35, as he cut the hair of a customer in the desolate town's only barber shop.

Tawergha's infrastructure was devastated, buildings are gutted and the streets full of potholes.

The scars of war are everywhere.

But after the reconciliation deal and promises by the Tripoli-based GNA that they would receive compensation, some decided it was time to go back.

Mahmud Abu al-Habel, a grey-haired grandfather in a bright red felt hat, was among the first.

The 70-year-old painstakingly rebuilt his house and helped nurture back to health hundreds of date-bearing palm and olive trees on his farm that had been torched during the attacks.

Abu al-Habel, accused of being a staunch supporter of Kadhafi, was forced to flee Tawergha, along with 26 members of his family.

But today, people should not hesitate to return home, he said.

"We should be here," insisted Abu al-Habel.

But political tensions between the rival administrations that emerged in the chaos after Kadhafi's death are delaying the disbursement of compensation to residents to rebuild their lives.

The "absence of a (central) government" is responsible for this, said Tawergha's mayor Abdelrahman Shakshak.

Jobs must be created and homes rebuilt, but the government is busy with "conflicts and divisions", he added.

Shakshak said that requests for the construction of 1,500 houses in neighbourhoods destroyed in the fighting "have fallen on deaf ears". 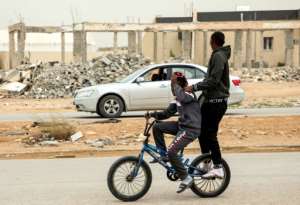 The mayor of Tawergha says the "absence of a (central) government" has delayed promises by authorities to disburse compensation to residents to rebuild their lives. By Mahmud TURKIA (AFP)

Tired of waiting, some residents like Tahani Khairi have found new lives elsewhere in Libya.

"It'll take 10 years at least for the town to get back to its former self," said Khairi, a widow and mother of four, who now lives in Tripoli.

"Tawergha is a mirror image of Libya's chaos," she added.

"Stability will not return unless there is a strong and united state."