Hopes lie crushed as Tunisians mark a decade since revolution 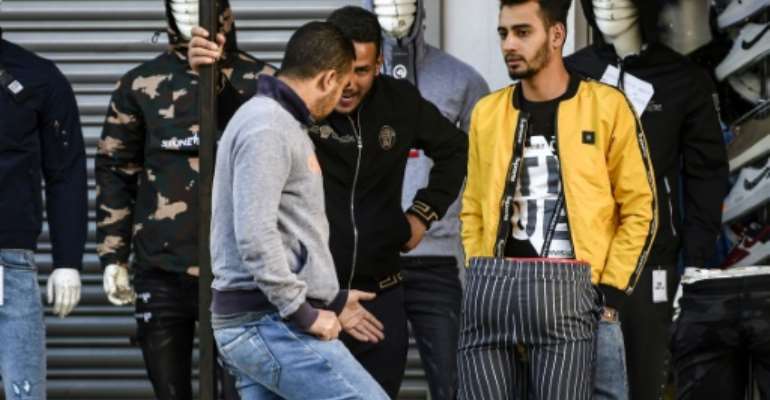 Unemployed young men gather outside a clothes store in the central Tunisian town of Sidi Bouzid -- jobs are still scarce in the cradle of the revolution and across the country, a decade on. By FETHI BELAID (AFP)

Ten years since the intoxicating early days of Tunisia's revolution, hopes for a better future lie crushed, and in the rural town where it began, few are celebrating.

It was in Sidi Bouzid that Mohamed Bouazizi, a fruit and vegetable salesman angered by police harassment, set himself alight on December 17, 2010.

Ben Ali fled into exile on January 14, 2011, sparking a series of uprisings across the Arab world.

But while Tunisia has been praised for its democratic transition, with freedom of speech and transparent elections, the hope of those early years has dissipated amid widespread corruption and repeated economic crises.

So there was little sense of celebration, even as Tunisian flags lined the streets of Sidi Bouzid this week.

Rather than festivities, December 17 has become a date for protests against the post-Ben Ali regime, which has still to deliver on two key promises of the revolution: jobs and dignity. 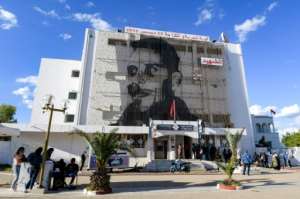 People queue up outside the main post office on Mohamed Bouazizi Square, its facade displaying a picture of Bouazizi, who set himself on fire ten years ago. By Fethi Belaid (AFP)

In Sidi Bouzid, large posters on the walls read: "We prepared the way for freedom, but you drifted away from it" and "slogans must be turned into action!"

"Neither the government nor the governed are in a mood for celebrating, because the general feeling is that the country is doing badly," said analyst Hamza Meddeb.

But, he said, "ten years on from the revolution, there's a real sense of failure."

The political class, more fragmented than ever since parliamentary elections last year, is paralysed by bitter infighting.

That has prevented it from tackling urgent social and economic problems, exacerbated by the coronavirus pandemic. 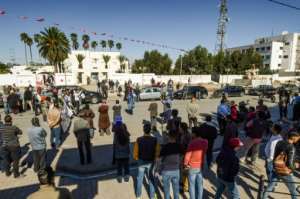 People took to the streets of Sidi Bouzid again this October, to demand stable employment, as the ten year anniversary of the revolution approached. By Fethi Belaid (AFP)

Salaries have been devalued by inflation, while political instability has crushed hopes for fundamental reforms.

Tunisians have been one of the largest contingents of jihadists fighting in Syria's civil war, while the economic situation has pushed many others to make death-defying bids to reach Europe.

In Sidi Bouzid, a stage has been erected for a concert with local rap stars, with the theme: "ten years, the wait has been long".

"This event shows the importance we place on the revolution, but it doesn't hide our anger and amazement at the current political class" and its behaviour, said Youssef Jilali, a spokesman for the organisers.

Meanwhile, no official visits to Sidi Bouzid have been announced -- even by President Kais Saied, elected in October 2019 on the slogan "the people want", a reference to the revolution.

His office said on Wednesday evening he would not be there to mark the anniversary, due to "urgent commitments".

Meddeb said Tunisians were "really angry. It's not a good moment for political officials to make visits."

Last week, Prime Minister Hichem Mechichi was met with cries of "resign!" when he visited the northwestern city of Jendouba to pay his respects to a young doctor who died in an accident in a hospital lift-shaft.

The tragedy, which prompted thousands of medics to protest in Tunis, was widely blamed on official corruption and indifference.

Tunisia's strongest party, Islamist-inspired Ennahdha, has struggled to cobble together a stable majority in the assembly, currently made up of eight party blocs and two dozen independents -- many of them deeply antagonistic.

A debate on women's rights earlier this month descended into physical violence between Islamist Al-Karama coalition lawmakers and social democrats from the Democratic bloc. 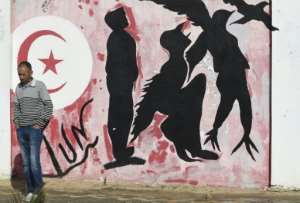 Saied said in January that he wanted to apologise in the name of the state for human rights abuses committed under dictatorships since Tunisia's independence from France in 1956.

But even the president "is disappointing a large part of the electorate," said Meddeb.

"Why would he go to Sidi Bouzid? To make yet another speech for the revolution?"

A decade since the uprising, "people don't have the patience any more to listen to speeches or announcements or declarations," Meddeb added.

I've never seen a male goat or cow running after another mal...
3 hours ago