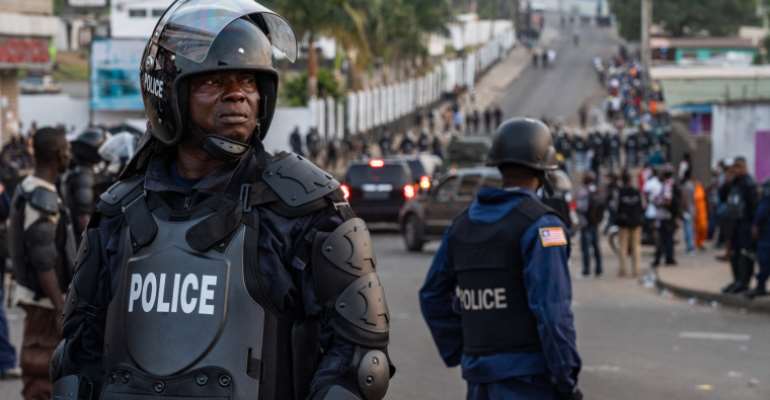 Police are seen in Monrovia, Liberia, on January 6, 2020. Liberian journalist Gloria Tamba has been in hiding since October. (AFP/Carielle Doe)

On October 22, in Paynesville, a suburb east of Liberia’s capital, Monrovia, an unidentified man in a black jeep drove up to Tamba while she was standing on a street and showed the journalist a photo of herself, and demanded that she stop reporting on recent protests or she would “disappear,” according to news reports and Tamba, who spoke to CPJ in a phone interview.

That evening, Tamba’s neighbors called her and said that at least two men had come through the area looking for her, saying that they wanted her to write a report for them, Tamba told CPJ. Tamba said that she instructed her neighbors to direct the men to her employer, but that her employer said no men matching that description ever reached out.

Tamba, an editor and reporter with Spoon TV and FM, a local television and radio broadcaster, had recently covered protests calling for investigations into the disappearances of people allegedly connected to Liberian businessman Moses H. Ahossouhe, she said.

Tamba told CPJ on December 10 that she had not returned home since October 22 and had gone into hiding, and that she feared for her life.

“Liberian authorities should take the threats and intimidation of journalist Gloria Tamba seriously, and her safety should be a top priority,” said Angela Quintal, CPJ’s Africa program coordinator, from Durban, South Africa. “Press freedom in Liberia requires that reporters covering events of public interest like protests or elections feel they can do their jobs safely and without fear.”

The photo of Tamba that the unidentified man showed her was taken from an October 20 broadcast of her coverage of a protest against Ahossouhe, Tamba told CPJ.

Tamba said that she was hesitant to cover a protest on October 22 after she was threatened, but agreed to cover the event after the demonstration intensified. However, Tamba said she stopped reporting and left the protest early after noticing a man taking pictures of her, and after her colleague warned her that she saw people pointing at Tamba and seemingly talking about her.

Several days later, neighbors again told Tamba that men arrived in the area looking for her, she said.

On October 23, Spoon TV and FM’s management filed a complaint to police about the threats Tamba received, and notified the Press Union of Liberia, a local trade group, about her case, according to Tamba and reports.

Spoon TV and FM General Manager Tetee Karneh told CPJ via messaging app that when the company filed its complaint, police said that Tamba should go to a police station for questioning.

Tamba said that she did not go for fear of being attacked by those pursuing her.

On November 29, Tamba’s family members called her and said that men believed to be working for Ahossouhe had paid Tamba’s friends for information about her whereabouts, the journalist told CPJ.

In phone calls with CPJ, Liberian police spokesperson Moses Carter initially denied that the police had received any complaint concerning Tamba, but later said that a complaint was received, but that Tamba failed to come to the station as requested.

CPJ called Ahossouhe for comment, but he did not answer.