Willis the cat from Tunis has become an icon of the revolution that sparked the Arab Spring uprisings across the Middle East that toppled several longtime dictators. By - (AFP)

The next day, on January 14, 2011, Ben Ali fled into exile, forced out by weeks of unprecedented mass protests against his rule.

Ten years later, the cat remains in rude health, and his cartoon alter-ego Willis from Tunis has become an icon of the revolution.

"I decided to use this character to tell the story of what was happening in my country," said Khiari, a painter and lecturer in fine arts.

"For me as an artist, it was a true revolution, because from one day to the next I was able to express myself freely," she said.

Her audience, initially just family and friends, has grown to over 55,000 followers today.

In November she published her latest Willis from Tunis book, a selection of her best work over the decade since the uprising.

Tunisia's revolution, with its demands for "work, freedom and national dignity", sparked a string of revolts across the Arab world.

The North African country has since been praised for its democratic transition.

But many Tunisians, disillusioned by economic woes, official corruption and pitiful public services, say they have gained little -- apart from to right to say what they think.

In one of Khiari's cartoons from 2018, Willis lies silently on the floor, a boot stamped on his face.

"Before the revolution," reads the caption.

The next frame shows the same cat under the same boot, but letting out a scream: "AAAAIIIE!"

The caption reads: "Today, happily we have freedom of expression." 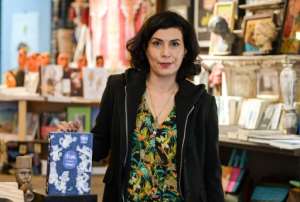 Khiari says she has always enjoyed drawing, but Ben Ali's fall let her creativity out of the bag.

Before the protests against his rule, she had hinted at political subjects in the titles of her paintings, but "a satirical picture as such, a political cartoon -- no, never," she said.

Today, she no longer pussyfoots around tough subjects. Instead, she takes regular swipes at Tunisia's post-revolt political class, seen by many as just as corrupt as Ben Ali's regime.

"Hide your wallet," one of her cartoon cats tells another as they walk towards the government's headquarters in Tunis.

"There are lots of robberies in this area."

This Thursday will mark 10 years since Tunisian fruit seller Mohamed Bouazizi, 26, set fire to himself, sparking the uprising.

Ahead of the anniversary, Tunisia has seen protests demanding jobs and investment in long-marginalised regions, amid an economic crisis amplified by the coronavirus pandemic.

Thousands of medics from crumbling public hospitals protested last week to demand the health minister's resignation, after a young doctor plunged to his death in a hospital lift shaft.

The tragedy was widely blamed on official corruption and indifference.

In this environment, Khiari's cartoons have struck a chord.

"The government fights corruption," reads the title of another of her cartoons, showing a cat in suit and tie sitting behind a desk.

"If you want to speed up the process," the cat purrs with a wide grin, "that can be arranged."

Khiari says that while the media describes Tunisia as a "laboratory of democracy", the messy reality is closer to that of a building site.

But, she told AFP at a chic art and craft boutique she runs with her husband, the revolution did sweep away "lots of taboos."

She regularly tackles themes of women's rights and gender inequality in her work.

In one cartoon, a female kitten asks why her brother gets more pocket money than herself.

"It's to prepare you for later on," her mother replies.

Khiari is on the board of Cartooning for Peace, set up by former UN Secretary General Kofi Annan and French cartoonist Plantu to "fight with humour for the respect of cultures and freedoms".

That is an ongoing battle in Tunisia, where press freedom watchdog RSF says the climate for the media and journalists has worsened since the election of a new president, Kais Saied, in October 2019.

For Khiari, that means the fight that began a decade ago is far from over.

"The attempts to silence us again have never ended, never, because freedom of expression bothers (some people)," she said.

"So unfortunately it's a struggle every day to preserve that freedom of expression."

'Visit our lands again and we'll visit mayhem on you' — Chi...
14 minutes ago